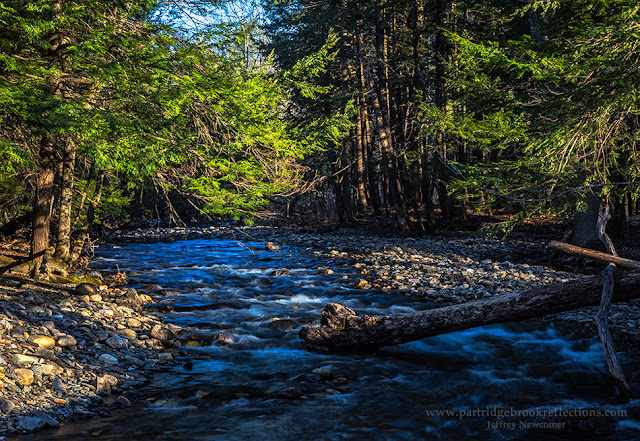 I often talk about grand locations, tall mountains, restless ocean shores, or classically appointed New England villages.  Certainly, New England offers an abundance of such attractions, but I live in a quieter slice of the region and I revel in the simple beauty of our “Currier and Ives” corner of New Hampshire and Vermont.

The Monadnock region in southwestern New Hampshire and also the southeastern part of Vermont are my prime photographic territories.  It is a country of rolling hills, with sweet little villages nestled in its hollows, and featuring classic farms, looking and working much as they did 150 years ago.  We glory in Mount Monadnock, our one big mountain, but as the archetypal “Mountain that Stands Alone”, Mt Monadnock does not dominate the countryside.  Rather, it contrasts and compliments the surrounding hills and fields. 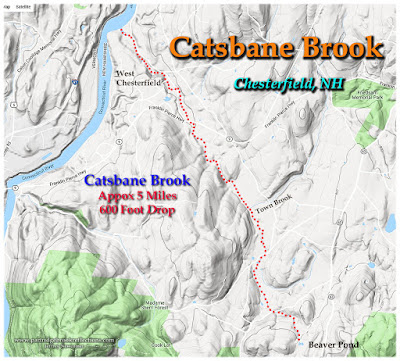 Gently flowing brooks punctuated by cascades and waterfalls are another feature of our region.  Spring is a great time to enjoy the flowing water and, since my second annual Spring Waterfall Workshop is coming up in a couple of weeks, I thought this would be an appropriate time to celebrate one lovely little brook in my home town of Chesterfield New Hampshire, the Catsbane Brook

Catsbane Brook winds its way through Chesterfield, meandering north and finally emptying into the Connecticut River in West Chesterfield.  It stretches though most of the town and is the longest brook within Chesterfield’s borders, but what is a Catsbane?

Catsbane Brook, What’s in a Name 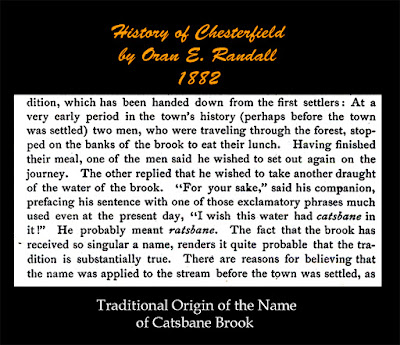 I have searched for a good definition of “Catsbane” and have found that it is a colloquial name for a variety of Orchid that may be especially toxic to felines, but why was this brook named after a poisonous flower?  A good question and, for an answer, I went to Audrey and Neil at the Chesterfield Historical Society.  These wonderful ladies possess a wealth of knowledge about our town, and very quickly, they were able to direct me to Oran Randall’s History of Chesterfield, published in 1882.  On page eleven I found a story from the town’s early history, in which two scouts rested along the brook for lunch.  When one lingered a bit too long to drink the water, his companion wished that the water was poisonous Catsbane, or perhaps “Rats-Bane” (Arsenic). Possibly just a dusty old folk-lore, but whether or not this story is true, it makes a nice tale.  You can read the story and decide for yourself.


My first goal was to find the point of origin of Brook.  Over its course, several streams contribute to the Catsbane’s flow, but its most notable origin is from a large beaver pond in the south of town.


The pond features an impressive system of well-maintained dams and the brook begins its travels as a modest stream, trickling under the logs. This week I explored the course of the brook and supplemented the many photographs that I have taken of the Catsbane over the years.

Hubbard Falls and Town Brook
Of the many contributors to the Catsbane’s flow, Hubbard Brook is likely the most significant.  My experience with the Hubbard Brook has primarily been of its dramatic waterfalls found before it crosses the Gulf Road and mingles in a substantial wetland.  With the addition of the waters of Town Brook, the brook eventually becomes the Catsbane before it crosses under Route Nine and flows into West Chesterfield. 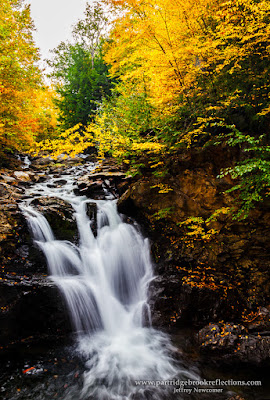 A number of other waterfalls can be found as the Catsbane drops though West Chesterfield’s little village, but the most dramatic no longer exists.  What I called the Catsbane’s “Little Niagara”Falls was formed as the brook passed over an old mill dam, but sadly, in the last couple of years, the dam has been by-passed.  For now there remains only a powerful jet of water feeding cascades, but I won’t object if some trees washed downstream to block the sluice way. 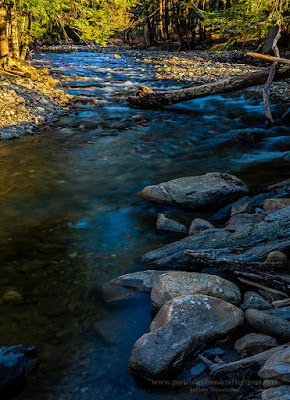 The Catsbane finishes it course meandering through flats to a broad opening into the Connecticut River. 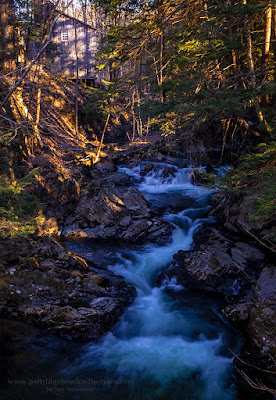 For years I have enjoyed photographing the Catsbane’s beautiful features, but it was instructive to follow the water from its modest origins to the dramatic flow at it terminus.  It made me appreciate that towns throughout New England are cut by intricate webs of water, which generally go unnoticed, but are critical to the health of the ecosystem.  Take some time to explore the patterns of water in your own community, and maybe even take a picture or two.

Posted by Jeff Newcomer at 1:48 PM