Aperture Size and Depth of Field, The Jesus Factor

I often say that much of what I know about photography comes from teaching classes and writing my weekly blog.  That is particularly true when I get asked questions that I can't easily answer.


A few years ago, I was observing one of Steve Hooper’s great photography class sessions at Keene State College’s Cheshire Academy for Lifelong Learning.  A student came up to me after the class to ask a seemingly simple question, “Why do the f numbers form such an apparently random sequence, and why do they go in the wrong direction.

Of course, I have always known the f stop sequence.  I understood that f/8 represented an aperture that is half the size of f/5.6, but I never felt that I needed to understand the origin of this, seemingly nonsensical progression. 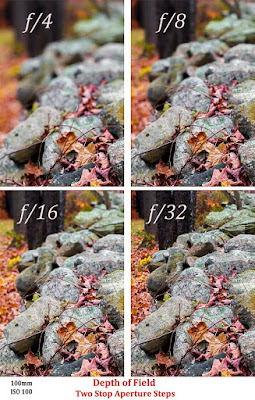 Suddenly, it bothered me that I had such a minimal understanding of this fundamental aspect of camera function.  The result of this revelation was a two-part search.  The first to understand the explanation myself, and secondly to find a way to explain it to future students.  It wasn’t easy, especially because the explanation involves MATH!, including inverse ratios and squares, but it was worth the effort.  Not only did it clarify the weird f stop sequence, but it also explained other mysteries of lens function.  You can check it out in my Exposure article from November 2014 (I hid my explanation at the bottom of the article!).

It was a valuable process of exploration and discovery, all coming from a simple question, and a question that I never thought required an answer.  Just one example of how my need to explain photography to my students has led to my own education.  And, this week, it happened again.

Introduction to Digital Photography - The Question
I am currently in the middle of my Introduction to Digital Photography course at Keene Community Ed.  This week’s class was all about Exposure.  I was explaining how aperture size impacts the amount of light reaching the sensor, and also affects depth of field.  You know the drill, wider apertures lead to brighter images but also result in shallower depth of field.  But then the question came, “Why does a wide aperture result in a small depth of field?”

I responded with my usual insightful answer that I use when I don’t know how to explain something, “Because if does!  Jesus made it that way!”  Surprisingly, that seemed to be a sufficient explanation for most of the class, but it is more likely that they just realized that they couldn’t expect any more enlightenment from me.


But the question was asked, and I knew that I couldn’t expect any sleep until I understood the answer sufficiently to explain it to my students.  Happily, the solution is straight forward and in no way related to a deity.  I thought I had a superficial understanding, but I  found a diagram from Wikipedia that I was able to modify to demonstrate the phenomena more clearly. 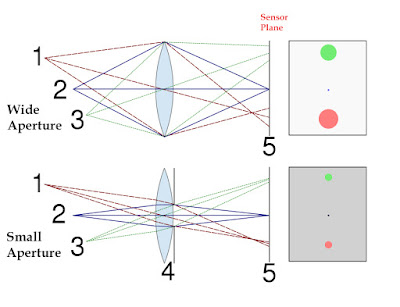 The upper and lower figures show the imaging of three objects at different distance from the lens.  The top is seen through a wide aperture and the bottom through a smaller.  In both cases the lens is focused on the center dot (2) and dots 1 and 3 are further and nearer respectively.  For me the essential thing to note is that, regardless of aperture, all three dots are brought to a point of sharp focus (purple dot), but only 2 (blue) reaches that focus on the surface of the sensor.  The rays from Dot 1 (red), which is the most distant, converges on a point in front of the sensor. By the time the rays reach the sensor plane they have spread, and therefore the image does not appear sharp.  The focus point for the near dot (3) (green) is at an imaginary point converging at the back of the sensor, and therefore also leaves a blurred image. 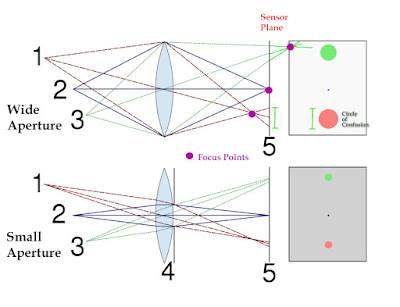 In the top figure, the wide aperture gathers more light, but the wider opening results in a more drastically splayed distribution of rays, leading  to a bigger area of blur.  These areas of blur are often referred to as “Zones of Confusion” (Green Bracket) and, when the zone is big enough, the subject will appear out of focus.

In the bottom figure the smaller aperture leads to a more columnated distribution of the rays.  This leads to a darker exposure, but also the most drastically splayed rays are blocked.  The focus point for each dot is the same but, because of the small aperture, the rays reach the sensor with a smaller area of blur, and the “Zone of Confusion” can be small enough that our eyes may see them as sharp.  Furthermore, with a small aperture, the subjects can be further from the point of perfect focus before the dot spread (the zone of confusion) is enough to appear blurry.

This is why a large aperture has a smaller depth of field.
QED.


Shifting Sensor Plane
One more thing to notice from this diagram.  Because all of the dots reach a sharp focus point somewhere, it can be seen that the sensor can be angled so that all of the points can be captured in sharper focus ( see figure).  This is why view cameras and tilt-shift lenses can record greater depth of field, by shifting the back or, more often, the lens to intersect with a broader range of focus points. Nobody asked, but I’ll throw that one in for free.

I can’t wait to lay this stuff on the next meeting of my class!  That will teach them to ask questions I can’t answer!