Call of the Sea

Having grown up spending my summers in on the water in Gloucester Ma, I have always loved the sea coast. Much of my early photographic experiences focused on the ocean during the long summer cruises taken along the New England coast in my parent’s little 26’ boat. The Monadnock Region and Southern Vermont have been great places to center my photography but the Atlantic Coast is the one thing that I miss about living in central New England. 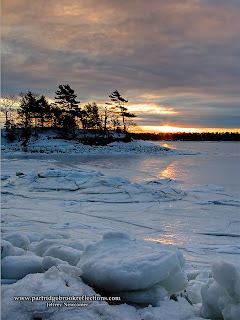 In recent years I’ve tried to reconnect with the sea on a number of photo shoots, but I never explored the area in the winter. Over the last several weeks renovations have left us without a kitchen and that provided the perfect excuse to get out of town for a long weekend. Sue and I visited old friends in Portland Maine (one of my favorite New England cities) for 3 days and I got a couple of sunrises at the edge of the Atlantic. I also had a chance to meet and go out shooting with another “Flickr Friend”. I have admired Peter Urbanski’s images for some time. Peter lives near Portland and when I decided to go over for a winter shoot I had to give him a call. He was incredible welcoming and generous with his knowledge of the region, but I was surprised to discover that Peter is not a big fan of seacoast images. As you can see on his flickr stream (http://www.flickr.com/photos/31258799@N08/), he focuses on beautifully composed images of classic New England farms and country-side. He apparently envies my proximity to the “Currier & Ives” region of New England. I guess proximity does breed contempt or at least ambivalence. Although the weather wasn’t perfect (I had hoped for some good fog or at least a blizzard), we still had a great time shooting the sunrise off Wolfe’s Neck in Freeport. Most enjoyable was the several hours of conversation while we struggle to stay warm. Although the morning was mostly cloudy we did get a glimpse of sun just as it rose above the horizon. To tame the contrast I used a gentle touch of HDR on the image here. Wolfe’s Neck Woods State Park is a beautiful 233 acre wooded seaside refuge close to Portland and miles away from the consumer craziness in nearby downtown Freeport. I will definitely try to get back in other seasons.

I also couldn’t resist returning to Portland Head Light for a sunrise. There is a reason why the Cape Elizabeth lighthouse is the most photographed in the country – it is THE classic Maine coast lighthouse, sitting defiantly on its rocky promontory begging to be captured. The challenge at Portland Head is to try to find perspectives that have not been done thousands of times before. On this morning the lighthouse was bathed in the warm crystal-clear light that has a special sparkle in winter, The resulting iamges belied the blustery cold that swirled around me. After I grabbed the unavoidable grand vistas, I focused mo 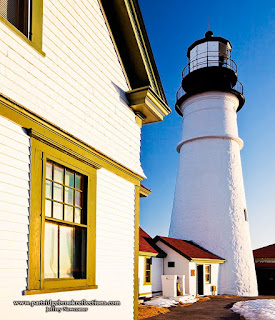 re closely on the way the light played on the lighthouse and surrounding buildings. The problem with getting in close is the keystone effect as you angle up to the top of the tower. I would like to be able to afford a $2000+ tilt-shift lens to correct for the distortion, but for the foreseeable future I do quite nicely with skew transformations in Photoshop. The keys to this poor man’s tilt-shift are to get the camera as high as possible to reduce the key-stoning and then pull back a bit on the focal length to leave room around the edges of your composition. This will help avoid loosing something important as you perform the necessary cropping.

All-in–all it was a great weekend of friends and photography. I hope I won’t have to wait for another new kitchen before I get back to the Maine coast in winter. I been having trouble finding time to add to my blog, but it seems that when I start it is hard to shut up. Sorry, but I am comforted by the fact that few people read this stuff anyway.
Posted by Jeff Newcomer at 3:22 PM No comments: