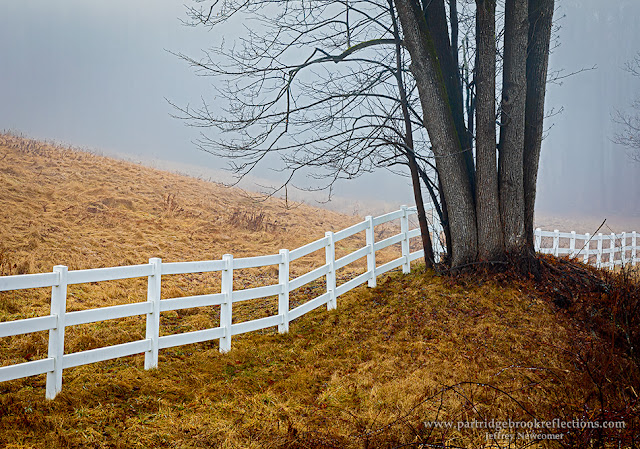 Despite the strangeness of the weather, we had a reasonably colorful autumn.  By December, our typical November “Stick Season” should have been long past.  We were blessed with an inch or so of snow in late December, but that quickly vanished.  It is now mid-January, and we are just getting our next modest snowfall. The result has been an exceptionally long opportunity to explore the patterns and muted colors of New England’s photographically challenging, post-autumn, in-between season. 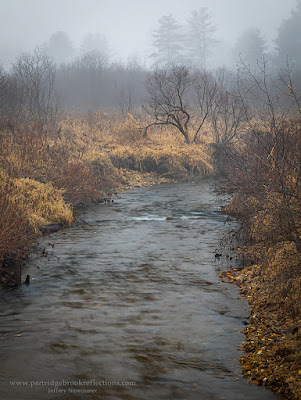 A couple of weeks ago, I was reminded of one of the climatic conditions that can salvage subtlety and interest from the starkness of the stick season.  I awoke to a lovely layer of fog that hung on the landscape and persisted for much of the day.  It is remarkable how a bit of mist in the air can lift a photographer from his pre-winter funk.  I shot out of the house and headed down the road. 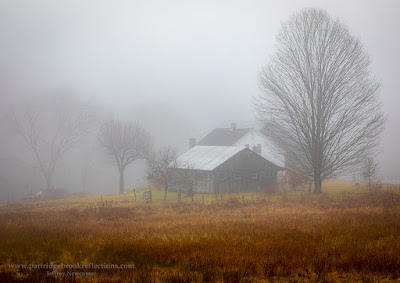 I didn’t need to go far, since fog can dramatically alter even the most familiar or mundane scenes.  It can add mystery and depth while transforming bright colors to soft pastels. Seen through fog, distant features can take on a pleasant, uniformly soft, appearance.  Lovely, but I find these images rather flat.  They miss an important feature of foggy weather, the enhanced sense of depth.

Placing something close to the camera, unaffected by the softening mist, can provide effective contrast to the shrouded distant subjects.  The effect is an expanded sense of depth.  Whenever I begin shooting in the fog, my first question is, “Where can I find something distinct in the foreground”.  Often the soft background serves to simplify the scene, allowing the foreground to stand out, removed from the busy distraction of the more distant elements.

On this day, I found plenty of interesting foregrounds, from an old, weed engulfed, hay rake to a collection of storm-tossed brook debris.   I especially like it when leading lines draw the eye through the scene to the distant background.

It was a lovely afternoon with the mist creating interest in almost every direction.  I was only forced to stop by the fading light.

Now we have some snow on the ground and the hope for more traditional winter photography,

but remember fog can also work its magic on snowy scenes. 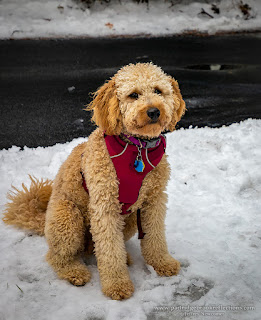 Our new puppy Benjamin Pierce (Benji) is enjoying his first snow.  He is named after the man who built our house back in the 1830s.  Our previous dogs, Nellie and Sophie were named after Benjamin's daughter and mother.