What does a photographer do when he has just one day to capture one of the most spectacularly beautiful spots on the planet. Of course he prays for great or at least interesting weather. He does his research, talks to the locals and THEN he goes to the wrong place for his one and only sunrise on Lake Louise in the Canadian Rockies 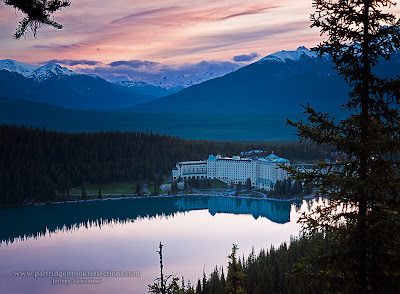 Recently I was reminded by a comment from a "Flickr Friend" of our amazing trip to British Columbia and Alberta in the spring of 2008. That also reminded me of an image of Lake Louise and the Fairmont Hotel at dawn that I had never processed. Perhaps I have avoided the image because it was not the one I was supposed to get - but maybe it didn't work out so badly after all.

Susan And I arrived at the historic Fairmont Chateaux Hotel on Lake Louise in the evening after a long, breathtaking drive from Jasper along the Icefields Parkway (Highway 93). The Hotel is a classic and classically expensive but we were treating ourselves that night. We were heading to Banff the next day so I knew I had only one shot at sunrise on Lake Louise. The weather sounded iffy, but I had no choice but to set my alarm to get up before dawn. After my research and conferring with our waiter at dinner, I decided that in the predawn I would climb to a ridge overlooking the lake and hope for the best.

As I ascended in the dark the next morning it seemed that my anemic flashlight only served to illuminate me for all the hungry bears coming out from hibernation. Somehow I survived the climb unmauled and found a nice overlook. With a little awkward leaning I was able to set the tripod for a good angle and I felt a certain 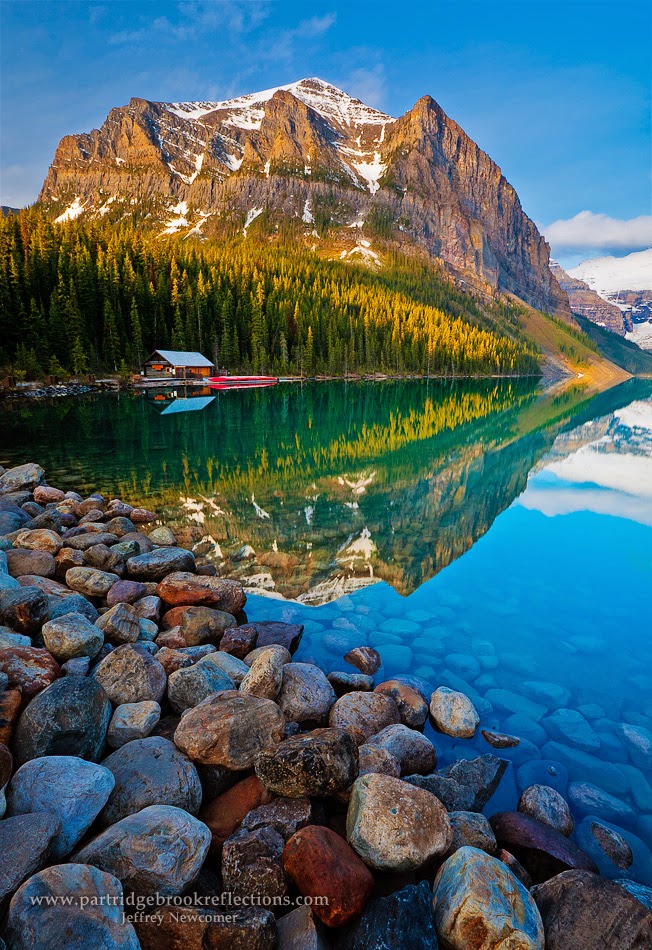 smug satisfaction that I got the best spot before the crowd of photographers arrived. As the eastern sky behind the hotel began to lighten with nice color, I started experimenting to find the best exposure to manage the contrast of the scene. I wasn't doing much HDR at the time. It was then that it occurred to me that I was STILL the only person at this overlook - where were the crowds. As I pondered this question, I began noticing distant voices and the sickening sound of dozens of shutters clicking furiously several hundred feet below. As dawn broke over both Lake Louise and my sleepy cranium the conclusion was obvious - I was at the wrong location. As it turns out the classic - once in a lifetime - spot for sunrise on Lake Louise is traditionally from in front of the hotel looking up the lake as the morning sun illuminates the glacier. I packed up and ran down the trail, bears be damned. Fortunately I didn't miss all of the show. The sunrise light on the lake and mountains changes minute by minute and, although it wasn't the best weather, I was able to grab some nice shots. I also had the reassuring company of about twenty other photographers all wondering why I was out of breath.

Tonight, as I finally went back to the image from above the lake, I realized that I was actually lucky to get two perspectives from my one sunrise at Lake Louise. And amazingly, I think I prefer the "wrong" one .


You can check out some of my other images from the Canadian Rockies on my web site: partridgebrookreflections.com
or in my flickr set at: http://bit.ly/ezlVVA

Posted by Jeff Newcomer at 1:23 AM