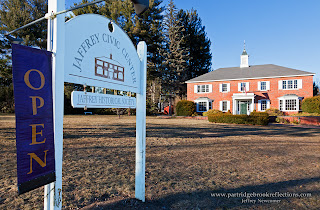 The Jaffrey Civic Center in Jaffrey New Hampshire has some of the nicest gallery space in the region. Pristine white walls, a great hanging system and wonderful light makes the facility an impressive cultural gem for this small rural New England town. The Center is a remarkable example of community pride and energy. The Jaffrey Civic Center first opened in April 1966 as a non-profit cultural facility funded and built by Marion Mack Johnson, a Jaffrey native and teacher, to provide a community center for educational and artistic purposes. 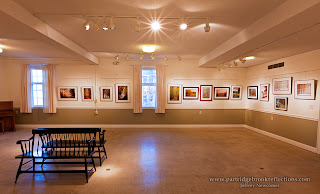 I'm thrilled to have the opportunity to show in the first floor gallery for the month of April 2011.  It's a big space, easily accommodating 32 of my images, the most I have been able to show at one time.  In the last few years I have had solo shows over 30 times. Of the all the restaurants, banks, town halls and more, this is one of the nicest venues. I have appreciated every opportunity to show my images.  I have learned, however, that dark moody light is great for atmosphere in a restaurant but not for showing photographs.  This place is a treat.  If you get a chance come check it out through April. The opening reception is on Sunday, April 3 from 2-4pm. I would love to see you.

Check out the images on my show flickr set:
Here are the directions taken for the Center's web site : www.jaffreyciviccenter.com/

From Keene you take route 124 South from Marlborough and look for the sign on the left shortly before the traffic light in "downtown" Jaffrey.

FROM BOSTON AND POINTS EAST


Route 2 West to exit 24B to Route 140 North. Follow 9.5 miles to the end of 140. At the traffic light, continue straight onto Rt 12 North. 9/10th mile up, take first right onto Glen Allen Street to Route 202. Follow into New Hampshire to Jaffrey. At Route 124, take a left. The Jaffrey Civic Center is the second brick building on your right after the bank.


FROM NY, CT AND POINTS SOUTH AND WEST


I-91 North (in Massachusetts) to Exit 28A, Route 10 (Northfield and Bernardston). Follow signs to NH, to Winchester. Take right onto Route 119 East. Follow through Fitzwilliam and Rindge. Take a left onto Route 202 North and follow to Jaffrey. At Route 124, take a left. The Jaffrey Civic Center is the second brick building on your right after the bank.


FROM MANCHESTER, NH AND POINTS NORTH


Route 101 West into Peterborough, NH. Take left onto Route 202 South into Jaffrey. At first light, take a right. At second light, proceed straight on Route 124. The Jaffrey Civic Center is the second brick building on your right after the bank.