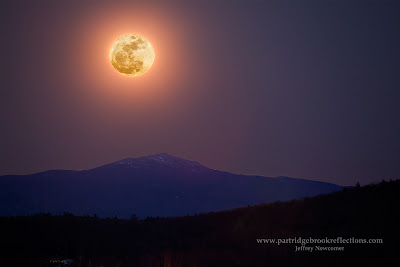 As everyone knows this weekend's full moon was the largest in more than 18 years. The combination of a full moon within 50 minutes of its Perrigee (closest orbital point) makes it appear about 14% larger than at Apogee. The Japan earthquake aside, the world didn't come to an end as it was ripped by disastrous tidal forces, but it did lead photographers all over the earth to wonder the same thing ... where do I go to get the shot. Living in the Monadnock Region of New Hampshire, I had little choice. I had to find a place to record the moon rising over the mountain profile that so dominants our corner of New England.
I started with a few simple requirements for my observation point. First I needed to be in an unobstructed position to catch the moon rising directly above Mt. Monadnock. Second I wanted to be far enough away to allow my 400mm telephoto to do its work magnifying the moon against the mountain's silhouette. Finally I was hoping that, after the shot, I wouldn't have to hike miles in the dark to get to my car. Thank heavens for the wonderful program "Photographer's Ephemeris" (http://stephentrainor.com/tools). This remarkable freeware program not only shows the time of rising and setting of the sun and moon, it also shows on a Google Map the precise locatio 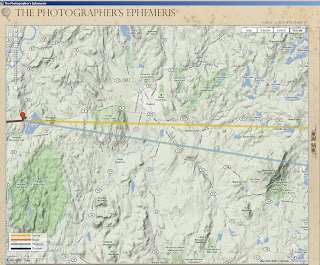 n of the objects at any time and from any location. I was able to find a line along which the rising moon would appear from behind the mountain. By following the line westward I could then scan for potential view points that would meet my criteria. As seen on the screen capture, I eventually settled on a spot on Pinnacle Springs Road overlooking Spofford Lake in Chesterfield. From this location I could see that the moon would rise above the northern shoulder of the mountain (blue line) and then move south across the peak. This placed me about 20 miles from Monadnock which worked well with my long lens. I set up my tripod, experimented with framing and then settled in to wait for the show. Remarkably the moon peeked from behind the mountain in exactly the spot Ephemeris predicted. Then the challenging stuff started.

The night was clear and the moon was spectacularly large as it appeared above the mountain. Because of an optical illusion the moon always looks larger next to the horizon, but this was amazing. The problem of course was the contrast. Unfortunately the moonrise on Saturday was at 7:22pm, and it was actually a few minutes later before the moon crept up over the mountain ridge. Sunset was at 7:02pm making the dwindling twilight quite dim on Monadnock. It is important to realize that at night the moon is still bathed in brilliant full daylight and to properly see the detail on the surface you must use daylight exposures. I found that, even with 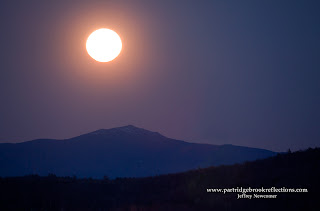 a moderately underexposured foreground, there was still an 8 stop difference between moon and mountain. Obviously this 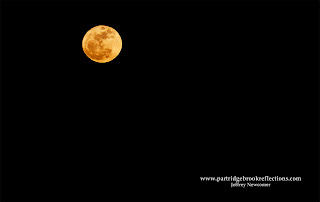 was a job for multiple exposures. With the two images included here you can see the range of exposure required for the final picture. You can also see that, yes, the moon was REALLY that big! Both exposures were at f8, ISO 400. The trick was to jump quickly between the 1/60 exposure for the moon and 4 seconds for the mountain, all before the moon moved out of line. I ended up taking about 40 images including some pulled back to see the lake in the foreground. I then packed up and ran to the annual dinner in Keene for which I was already 2 hours late. I think my priorities were precisely in the right place. So what if my dinner was cold.

Of course I couldn't wait to get home to start working on these images. It took some painstaking PS work to get the moon selection just right and to balance the lighting and color, but I think the result is a good representation of magnificent display that met my eye last evening. It was also a good example of how careful planning and a shameful neglect of social responsibilities can lead to some nice results.

If you missed the record moon last night, don't despair. A full moon comes along every month or so and you don't have to wait another 20 years to get spectacular results.
Posted by Jeff Newcomer at 10:32 PM