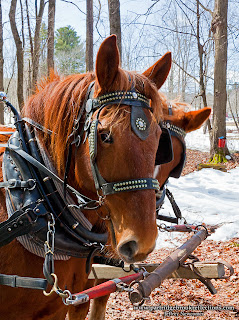 Stonewall Farm is a remarkable regional resource in Keene, New Hampshire. It is a nonprofit working farm established as a educational center to “connect people to the land and the role of agriculture in their daily lives”. One of the highlights of the farms winter season is the Annual Sap Gathering Contest. This year the weather was kind to the 11th Annual Contest. It was chilly, but the sun stayed out most of the time and the biting morning wind softened as the day went on. This is was my fourth year shooting the event and it remains a unique opportunity to step back in time to experience maple sugaring with the traditional techniques. This year 12 teams of ho 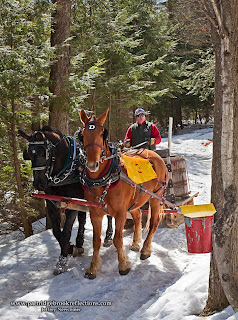 rses competed pulling wood sleds through the forest course collecting sap from buckets. Teams were scored on speed, efficiency, control and on the amount of sap collected, but the competition was really secondary to the chance to see all these magnificent animals work under the control of their dedicated owners. I especially enjoyed observing the different ways that drivers maintain a close connection with their teams. Vocal tone and gestures often seemed more important than pressure on the reins. 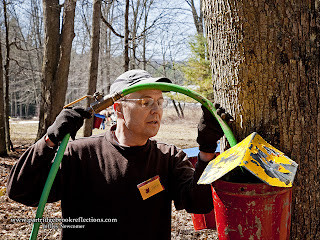 Visitors are encouraged to watch the competition from various locations along the open areas of the course. Again this year, I had the special opportunity to photograph the teams working in the woods instead of being confined to the roped off observation areas. With the experience of a few years of trial and error I had staked out my favorite spots for capturing the action while avoiding being trampled by these massive beasts. I tried to find angles that included the colorful buckets and avoided, as much as possible, the hard working judges and helpers that line the course. The helpers are there to fill the buckets with water after each team comes through. Sorry to break the magic, but you didn't really think that the trees at the farm can actually produce a gallon or more of sap every 10 minutes throughout the day. This year I tried to catch more of the action by finally trusting my camera's high ISO capability. Along with the generally sunny weather the 800 ISO allowed me use fast shutters and wider depth of field, and the new noise reduction algorithm in Camera Raw took care of the grain. 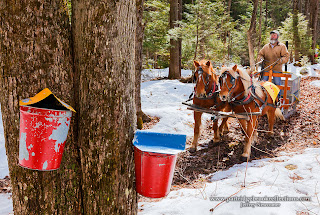 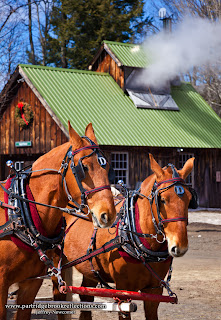 The Sap Gathering Competition is much more than just a contest. It has the feel of a late winter harvest festival. After all maple syrup is the winter harvest in New England. There was plenty of food and drink as well as the opportunity to see many of the teams close-up, but the most popular attraction of the day was the sugar shack which was furiously boiling down the real sap all day long. As always, the smell in the shack was subtly sweet as 40 gallons of sap was boiled down to make each gallon of maple syrup. It was wonderful observing the mesmerized expressions of little children as they watched from the foggy interior of the shack and even more exciting to see the kids react as they sampled the warm syrup fresh from the evaporator. I can think of nothing that so clearly demonstrates the reason why Stonewall Farm's mission must be applauded and supported. 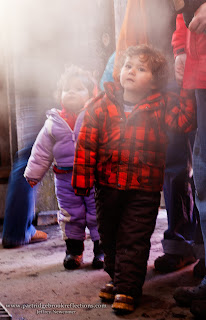 You can discover more about Stonewall Farm's year-round programs and learn how you can support this uniquely valuable community asset by visiting their web site :
http://www.stonewallfarm.org/
You can check out more images on my Sap Gathering flickr set .
Posted by Jeff Newcomer at 11:01 PM