When It Comes to Covers - You Never Know 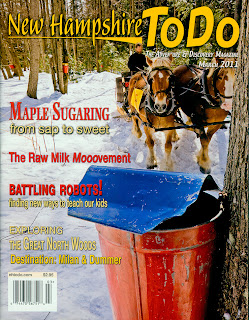 It seems silly to have to say that we always submit our best work for show juries or publications, but I am often surprised by which images end up getting selected, especially when it comes to print. I find myself often saying, to myself, "You really want that one?". It actually has much more to do with what wasn't selected than what was, as editors pass over what I think is my best stuff. As I've struggled to push ego out of the way, I've come to appreciate, that editors have many more considerations beyond pure "art". They have to decide whether the image tells the desired story, whether it fits into the available space and, in the case of a cover photo, whether the image can survive having text splashed all over it. Recently this last point was brought home to me once again.

A couple of weeks ago I was excited to learn that New Hampshire To Do Magazine had selected one of my photographs for the cover of their March 2011 issue. They had chosen an images from the Stonewall Farm's Sap Gathering Contest in Keene, NH. Each year folks from throughout the Northeast gather with their horse teams to celebrate traditional maple sugaring techniques and I get the chance to temporarily escape from the efficient but ugly tubes that are invading our forests. Over the last three years I've been able to capture some nice images of the whole process and a couple of years ago one of these photos actually took first place in the NH Tourism Bureau's State Photography Contest. You can check out some of these pictures in my Sap Gathering Set on Flickr (http://bit.ly/eSRmH5) or on my web site (partridgebrookreflections.com). 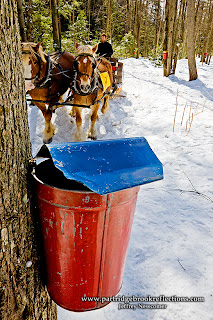 The editors at NH To Do had access to all of my web images and I was surprised when they chose one that I have always found a bit disappointing. I had set up to capture a single bucket in the foreground with the sled approaching. With my camera fixed on a tripod, I first took an image focused on the bucket and then was able to composite this foreground image with the images focused on the sleds as they came by. The horses were moving much too fast to capture this extreme depth of field in a single exposure without unacceptably long shutter speeds and high ISO. In the selected image I felt that I had hit the shutter a second too late as the horses were passing. The composition would have been much stronger if the team was in a more balanced position in the upper right quadrant of the frame rather than both team and bucket on the left side. But, on reflection, I suspect that it was this imbalance that made this image attractive for the cover. All that open space on the right provided room for the required text and there was enough headroom in the image to provide space for the title at the top. It probably also helped that they could flip the image horizontally without the number on the bib giving them away.
I tend to brutally crop and recrop my images to focus on a few simple components. I am always looking to remove elements on the periphery that distract from the story. The point here is that when it comes to covers you never know what might work. Often it is the image with extra head room and areas of open space that will win the prize. This is one reason I usually delay cropping until fairly late in the editing process and then I always save an uncropped copy. You just never know.
Posted by Jeff Newcomer at 1:01 AM