The Temptation of One Minute More 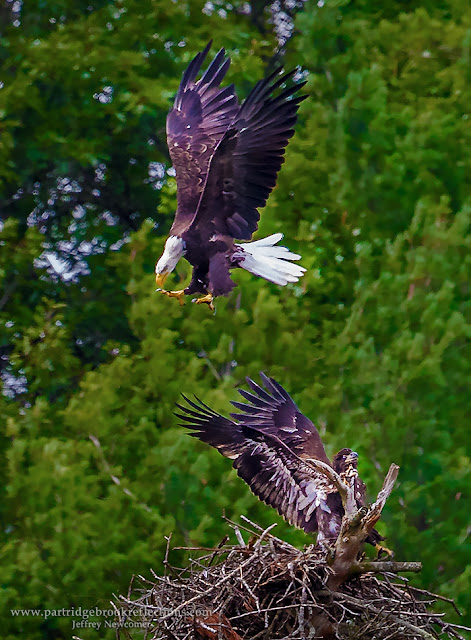 It is my habit to head out shooting after I complete my Saturday morning visit to the transfer station in my hometown of Chesterfield New Hampshire.  After making the necessary drop off at the dump, I usually start with a drive through Roads End Farm.  I have been visiting this lovely horse farm for years, and I nearly always find fresh subjects to shoot.  Then, if I have the time, I look for other places to explore in my beautiful corner of New England.


My Eagles
This weekend, I visited “my Eagles” on the Connecticut River, and the stop reminded me that photography, and most importantly wildlife photography, is often about long periods of waiting punctuated by breathtaking moments of excitement.


In the Summer, there are just a few locations along the Connecticut River in Chesterfield that open to a clear view of the high snag, that is the yearly nesting spot for our pair of bald eagles.  This spring, I saw at least one fledgling appear in the nest, and although, this time of year, things get less exciting, it is still interesting to watch the comings and goings of the adult and immature Eagles.


Yesterday I settled in at the side of the River Road, with my 400mm lens resting on my car window, and trained on the nest, across the river.  One majestic adult Eagle was perched above the nest, calmly scanning the passing waters.  I adjusted my focus and selected an ISO of 800, that allowed a shutter speed of at least 1000th of a second.  Then I waited for some action.


And I waited.  Wildlife photographers are experienced with this, but I usually shoot trees and mountains, and trees and mountains perform on a much more predictable schedule.  I have learned to expect some photographically interesting comings and goings at least every 30 or 40 minutes, but on this day, an hour passed without any activity.  That LAZY feathered national icon just sat there as if he thought he was posing for a marble monument.  Meanwhile, my nearly seven pounds of camera and lens were getting heavier by the minute.


I wanted to surrender.  I had chores to complete, or at least a nap to take, but after investing more than 60 minutes, I told myself that something must happen soon.  I knew instinctively that all sorts of exciting avian behavior would occur as soon as I packed up my gear, and that was the trap.  As always, the temptation to hang in for just one minute more, and then one minute longer was strong.


No picture to Show Here !!

Then, something happened!  Just as I looked away to re-position the camera, a juvenile eagle swooped in and somewhat forcibly dislodged the parent from the nest.  Great action, I presume, but the switch occurred in a moment, and I missed ALL of it!  I was pissed! – Sorry, I was disconsolate.


Needless to say, I was annoyed to have wasted so much time, only to miss the big event.  Now I had to be satisfied with pictures of the statuesque juvenile eagle placidly surveying his domain and mocking the frustrated photographer across the river.  I was ready to leave in disgust, but then the, “one more minute” temptation kicked in.  I hung on, and the magic finally happened.


Yes!
With no warning, the mature Eagle came swooping back to reclaim its throne.  I only had time to trigger a burst of images, and, in a blink, it was over.  Both birds flew away, but when I got home, I found that I had captured a few of the best pictures of, what I assume to be good-natured domestic aggression between Eagle parent and progeny.  There was many a time when I wished that I had menacing claws to go after my rebellious teenagers in a similarly "good-natured" way.

Checking the time stamps on the 5 key images, I found that all the action occurred over just about one second!  More than an hour of boredom for a second of excitement. 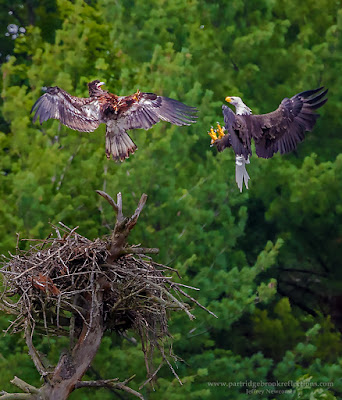 Now I understand why wildlife photographers can show such amazing patience. Long ago, I learned in the psychology lab that I could train an Albino Rat to press a bar hundreds of times for only the rare reward of a food pellet.  I would never suggest that wildlife photographers are equivalent to rodents, but I have discovered that occasionally majestic rewards can come from nonsensical persistence.  I too am susceptible to the siren temptation of “one minute more”, and at least this time, I got my food pellet.