I Get My Dose of Fenway


We always try to get down to Boston in the summer to catch a couple of Red Sox games.  Now that my daughter Abigail has moved to Cambridge, we have the added incentive of spending time with her and her boyfriend Grayson.  Earlier this year we picked up four Sox tickets in a raffle benefiting Keene’s Colonial Theater.  It was a great chance to travel south for brunch with Abby and Grayson in Cambridge before the afternoon game against the Angels. We live a little less than two hours northwest of the city, so it is never a struggle to make it to civilization.  After brunch, we drove to the MIT Campus and parked on a side street.  It was a lovely day for a walk, over the Mass. Ave bridge, to Fenway.  Passing through Kenmore Square and I had a chance to show Abby the windowless, basement Hobbit hole that was my home for the early grind of my medical school experience.

I have never lost the sense of magic that I experience every time I come to the top of the stairs, and first see the vivid hue of Fenway’s historic turf.  It is like no other green.  We were seated along the first base line, and despite the hot sun, we were in a prime foul ball catching zone.  Sadly, no luck, but I got my mandatory popcorn and settled in.


Fenway doesn’t have a lot of restrictions on bringing fancy cameras into the park; “Cameras and video cameras are permitted but cannot be used to reproduce the game and must not interfere with other fans' enjoyment of the game.”  No problem, I could bring my big DSLR and 100-400mm zoom, but I prefer to keep things light and inconspicuous.  The perfect solution is “Susan’s” Canon SX50 HS.  The same camera that Susan has steadfastly refused to touch!


I got the SX50HS for Susan to take along on our tour through Alaska in 2014. 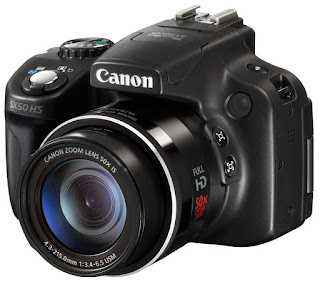 The camera is light, with a small sensor, but has a 24-1200mm fixed lens! With that focal length range, why would you need other lenses?  Susan and I tend to choose different hikes on our tours.  I generally stay with the photographers, making frequent stops for shots, while Susan moves more quickly with the non-photographers, who are often called the “natural history” groups.  Since we are usually exploring different areas, I assumed Susan would want her own camera to capture the action, especially if she is the lucky one to be charged by the angry grizzly.

"Angry charging Grizzly" is one of those situations for which a 1200mm lens would sound pretty good.  But NO.  She continues to argue that I’m the photographer and she has no need to touch that crazy cameray thing.  Cameray? - My word not hers, but I suspect it will catch on.  I’ve tried to sneak the camera over to her side of the bed when she is sleeping, but all my strategies have failed.

Ok.  I’ll admit that I don’t mind being saddled with this nicely capable little “carry around” camera, but Susan has just upgraded to the iPhone 7, which means that she is unsuspectingly carrying a pretty decent little camera.  My evil plan has succeeded!  Now if I can only get her to use the DAMN thing! 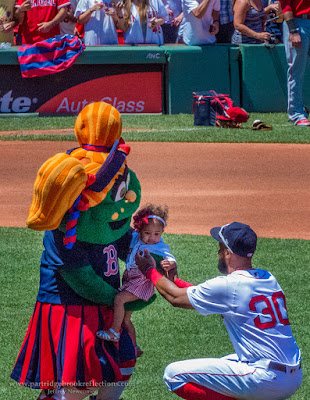 Sorry for that unfortunately long diversion, but I had to get it off my chest.  The bottom line is that I have a nice little camera to bring to athletic events such as the Red Sox, or to third world countries where a big “fancy” camera could be a dangerous attraction. Obviously, the 1200mm focal length on the SX50 HS allows me to get closer to the action, but the camera also has a full range of controls, and although the small sensor can show problems with noise at high ISOs, it does result in a deep depth of field in macro images.  And, perhaps most importantly, the camera shoots in RAW! 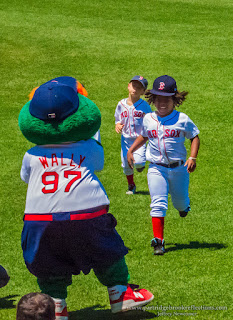 Children's Day
We got to the game early and had the fun of watching Children’s Day.  The Red Sox players had a chance to frolic on the field with their kids.  It is a healthy reminder that many of the players are only a little more than kids themselves and have their own new families. 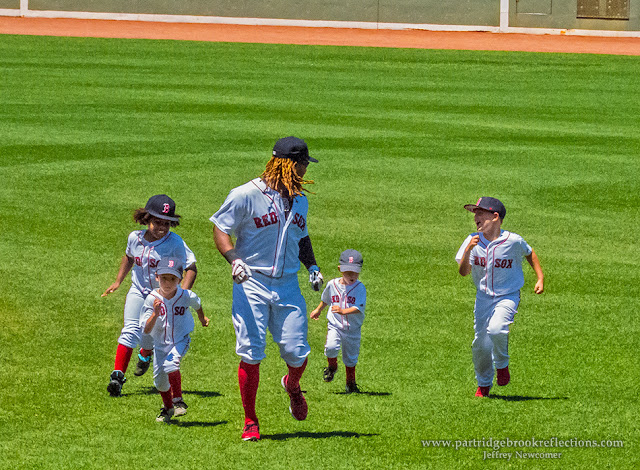 The game itself was a bit of a disappointment with the Sox loosing 4:2 to the Angels and, again, no foul balls coming near.  Photographically, I focused on trying to catch some of my hometown heroes in mid-swing.  The SX 50 has only a slight shutter lag, but it was still difficult to time my shots to the right moment in the pitcher’s delivery.

A couple of years ago I was lucky to capture the “holy grail” of such shots when I caught Big Pappy in a gigantic swing with the ball visible sailing off the bat.  AND it was a home run – I swear!!   No such luck this time.  Among the pile of failed shoots, I did catch a couple of swings and one with Mookie Betts ducking away from a brush-back pitch.  1200mm is great, but the biggest challenge was to hold the little camera tightly enough to keep the images sharp. 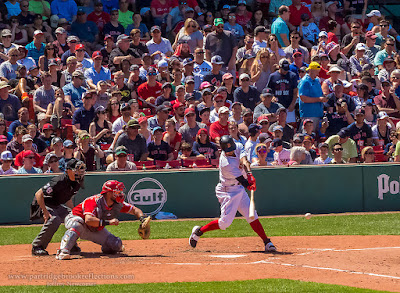 Capturing action shots from far back in the stands can be a challenge.  Obviously, a long lens can be helpful, but anticipating the key moments is difficult. Your arms can get numb continually holding the camera in front of your face waiting for the magic to happen. As much as I would love to capture the critical play, I don’t want to spend the whole game with a camera blocking my view of the live action.  I usually shoot in just a few situations.  Catching the swings is fairly easy.  Of course, being along the right field line I could only catch the right-handlers.  Capturing the quick and unpredictable action in the infield can be difficult, but with a man on first I can watch for a steal or a dive back to first to avoid a pick-off.  If I am on the left field side I can look for action in the home dugout.  A little scratching or spitting is 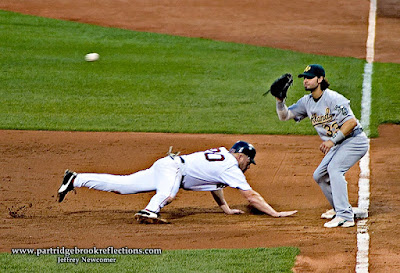 always exciting.  All of this needs to be limited within reason.  There are professional sports photographers right on the sidelines who I can trusted to shoot the key plays. I just try to get a few images to document my attendance at the event and settle back to finish my popcorn.  After all, I’m a landscape photographer and despite years of visiting Fenway I have yet to see a tree in the “park”. 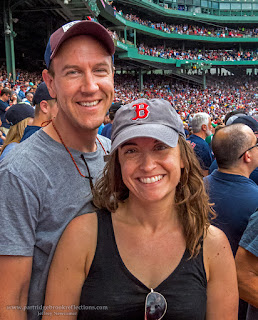 Like many newer cameras, the SX50 can construct a panorama image from a series of shots, so I had to capture a disorientingly complete view of the park, but my favorite pictures are of the family while they were trying to steal my popcorn.

Despite the score, it was a great day trip and a good chance to play with my little carrying around camera.  My only disappointment was that I failed once again to slip “Susan’s” camera into her pocket book. 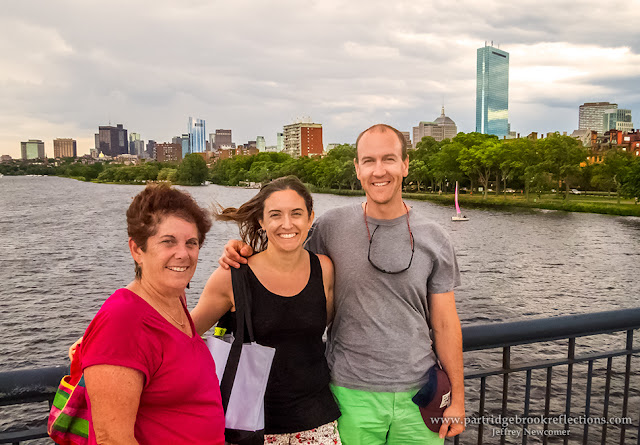