Making the Most of a Not So Super Moon

Last Sunday I travelled to the Maine Coast to photograph our latest Super Moon.  Things didn’t come out as I had hoped, but nature photography is all about getting the most from what nature offers.

Simply speaking, a Super Moon is defined as a full moon that occurs at its closest approach in its elliptical orbit around the earth,
at “perigee”.  In that position the moon is about 12-14% larger in the sky and about 30% brighter than it appears when farthest away, at “apogee”.   When magnified through our photographic lenses, Super Moons are not dramatically more visually exciting than any other “ordinary” full moon. Every time they occur, however, they draw attention to the beauty of our fully illuminated partner, and I usually get caught up in all the hysteria.  This last weekend the Super Moon struck once again.

I have been lucky in my previous attempts to capture the full moon at perigee.  In March of 2011 and November of 2016, I was blessed with clear skies to catch the moon rising above Mount Monadnock.  In September 2015 the moon rose into the clouds over the Old Saybrook Lighthouse, but before it faded, I was able to grab one of my favorite moonrise shots.  Each time, these images required travel and careful planning to be in the right place at the right time, but I was always rewarded with amazing shots. That was not the case this weekend.

The Thrill of the Chase


I must remind myself that the excitement of discovering a spectacular image comes, in part, from the fact that often these explorations fail.  Without the disappointments, the successes would be less triumphant.  We study and plan, but in the end, being a landscape photographer means we often succeed or fail on the whim of nature.

Super Moon over Nubble Lighthouse
Last week I gave a talk to the South Shore Camera Club in Quincy Massachusetts.  I discussed various evening photography
topics including Holiday Lighting, rising moons and even rainbows.  It was a wonderful group, with great enthusiasm and interesting questions.  They were especially excited about a shoot they had planned for Saturday to capture the Christmas Lights on Nubble Lighthouse in York Maine.   I look forward to seeing their images, but it also gave me the idea to go to the coast to capture the full moon rising over Nubble Light.  Sadly for the club, on Saturday evening, the skies were cloudy, but I was hoping for better luck on Sunday.


I pulled out my Photographer’s Ephemeris and found a spot on Long Beach, south of Nubble Light, that would give me a good angle on the rising moon from about 1.7 miles away.  I settled in on

the beach about 30 minutes before the 4:38pm moonrise.  Happily, the winds were calm and the temperature only in the 40s, but I was a bit concerned.   Several years ago, I might have been among very few on the beach to get the long view of the moonrise.  Most would have been clustered close to light, but, since the Ephemeris has become popular, many serious photographers know exactly where to stand for the best shot.  The scary thing was that most of the other photographers on
the beach, about 30 of them, were gathered about 200 yards further south of my preferred location.  Was I in the wrong spot?  I found some comfort after being joined by two other mutinous photographers, both from the Greater BostonNight Photographers.  After double checking the Ephemeris, and also the Photopils App, we remained convinced that we had it right.  Still, we mentally calculated how long it would take for us to sprint down the beach to join the crowd

We had a nice angle on the elaborate lighting on Nubble Lighthouse, but we also saw the clouds behind the light.  We waited for the time of moonrise and hoped that there would be a magical break in the clouds to allow the spectacular moon to break through, but this time my Super Moon luck ran out.  There was a brief and tauntingly beautiful glimpse of the fire red moon screened by the low clouds.  It was just enough to tell us that we were in the right spot to see the moon skim over the lighthouse, and then it was swallowed by the clouds.  The moon only reappeared in all its “Super” glory much later and high in the pitch-black evening sky. 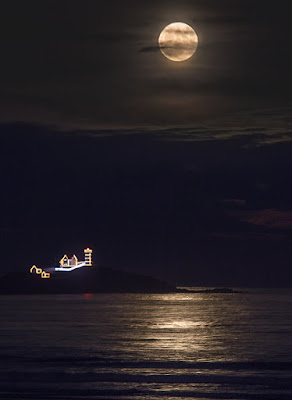 Somehow, I convinced Susan to join me on this futile expedition.  She was concerned about letting me drive the 5-6 hours by myself, especially on the long dark trip home.  But was our trip a total failure.  I believe one of the greatest challenges for photographers is when we must make the most out of bad conditions.

At the very least Sue and I had a long and largely uninterrupted time to talk.  Something which is quite rare these days.  What to get the kids for Christmas, whether we will escape from winter for a trip to New Orleans and most importantly, when will we finally get a dog!

But I did have a bunch of camera equipment with me, so I had to shoot whatever nature left for me to see.


A Sliver of Moon


First, we did see a momentary sliver of moon as it first peaked above the horizon.  It was not yet in the perfect location over the lighthouse, and it was screened by clouds.  It only lasted about a minute, but I was able to capture just one image that showed parts of the fire-red disk.  When I zoomed in, the reflected sunset light made the moon appear like sunrise, with the house and the people on the rocks providing a nice sense of scale.  And then it was gone. 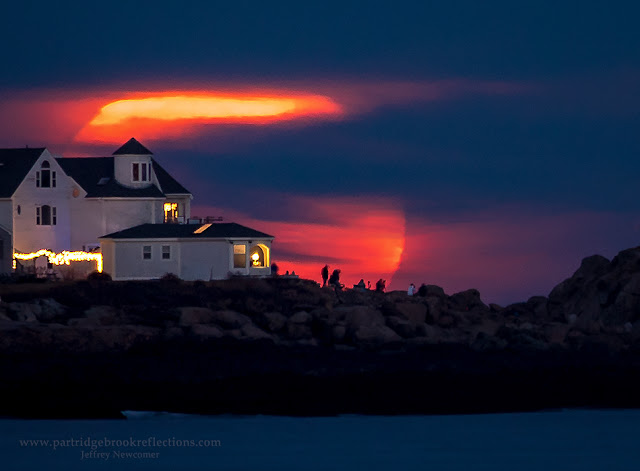 On Cape Neddick
By watching the moonrise from the beach, I knew that I would miss 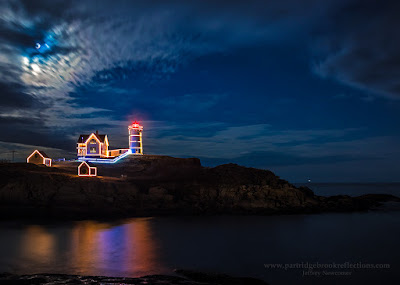 shooting the lighthouse decorations while the island was still bathed in the beautiful twilight “Blue Hour”, but I still wanted to shoot the lights.  After we dealt with a dead car battery on the shore road (thank you AAA), we headed up to the crowded parking lot across from Nubble Island.  I was surprised that, from behind the clouds, the bright super moon created its own “Blue Hour” to soften the harsh contrasts that might have been created by the bare holiday lights.  I grabbed a few shots with the clouds skittering across the moon.  Then, in response to Susan’s good natured insistence, we headed back toward home, with dinner on the way.

The Wreaths of South Street 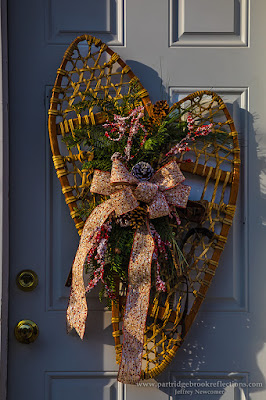 On our way to the shore we stopped for breakfast in Concord New Hampshire.  Tuckers is a popular place for Sunday brunch, but we had to wait 45 minutes for a table.  While we waited for our little LED device to ring us back to the restaurant, we took a walk down South Street toward the center of town.  It was a great chance to focus on the variety of holiday door decorations. 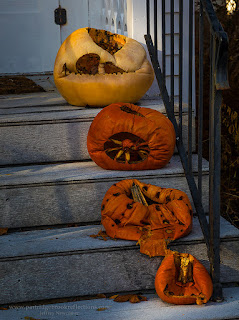 It was a great foretaste of the Christmas season as well as one rotting reminder of the Halloween past. We timed the walk perfectly, getting back just in time for a lovely breakfast, then it was on to the cloudy coast. 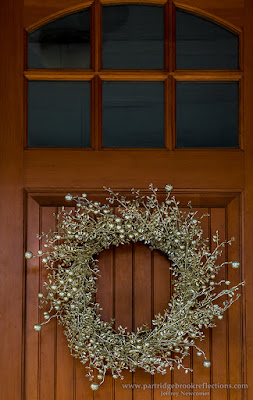 An Old Friend and a New Building

Of course, a trip to the coast is never just about photography.  On our way, we stopped in Portsmouth to pick up some Christmas gifts.

After I had scouted my location for the moonrise, we visited with
our dear friend Michele.   She is the Executive Director of the York Community Services Association and just last weekend celebrated the grand opening of their wonderful new facility.  The non-profit association provides programs to assist low income individuals and families living in York, and also runs a thrift shop and food pantry to help feed people in need.  Susan and I have loved knowing Michele for years and her dynamic personality is a perfect fit for her community service organization.
It was a long and busy Sunday with some disappointment.  Overall a good day with a reminder that, in photography, if everything always went perfectly, it would not be nearly as exciting when the magic happens.