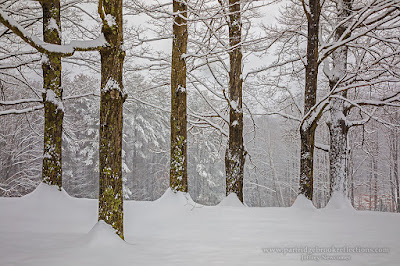 It was only a couple of inches, not even enough to fire up the snow blower, but the first accumulating snow of the season is always special.  Even if it melts away the next day, the first coating of white marks, a symbolic end of the dark, gray "stick season".


I always welcome the calm of November.  After the garish colors have fallen from the trees, it is a time to catch up on the editing of all those amazing foliage images.  Additionally, this year, I have work to do on the several thousand pictures from our wonderful trip to Italy.  Stick season also provides an opportunity to work on holiday orders and prepare for my up-coming classes and workshops, but, it is possible to find interesting things to shoot.  The oak and beech leaves continue to hang on, and the bare branches create a sense of peace before winter's rage.  Accepting all of this, when November fades into December, it feels like it is time for the white. 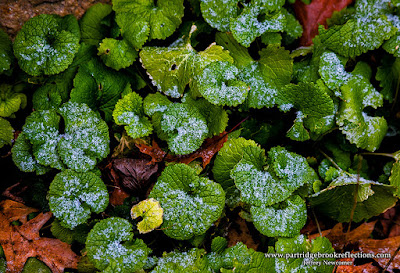 Last weekend, we finally got our first snow, and I was ready.  The first dusting came Saturday afternoon.  I love capturing the first flakes, as they salt the dark earth.  Before the snow totally obscures the soil and fallen leaves, an intricate texture can be seen on the ground and on the newly formed pond ice.  Knowing what is to come makes the delicate scene even more affecting. 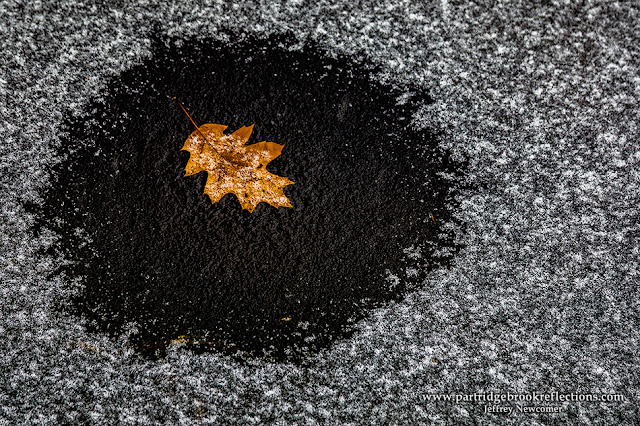 Through the night the snow fell, occasionally heavily, but only accumulated 2-3 inches.  It was warm enough for the snow to stick to the trees and the morning dawned cold with calm allowing the snow to stay on the branches for at least a couple of hours. 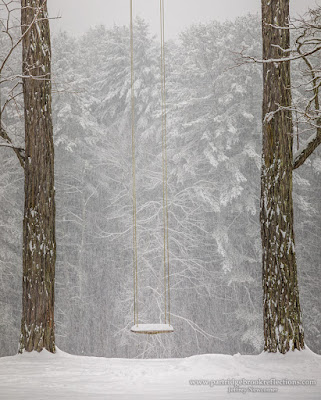 I got out as early as I could in an attempt to catch the season's first "Winter Wonderland" time, when the fresh snow still coats houses, barns and trees.  The difficult question, as always, was which direction to travel.  On Sunday morning, I headed north, along Route 63, through Westmoreland and Walpole.  My goal was to try to keep ahead of the melting, and I was able to capture a couple of hours of at least a little Winter Wonderland. 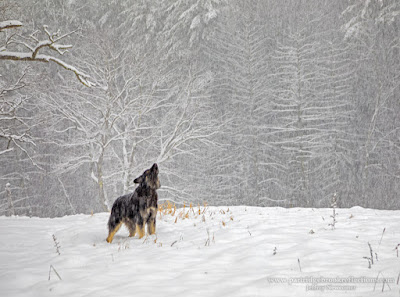 It felt as if we are truly embedded in the winter season.  On Tuesday we enjoyed another, more substantial, storm.  The snow from this one came down during the daylight, and I had a great time chasing scenes of active "Winter Wonderland".  This time I headed out to Vermont, spending most of my time exploring the back roads of Dummerston.  The roads were slippery, but the snow added softness and depth to the beautiful New England scenery.  Against the snowy back-drop, I was able to isolate a yellow tree, a lonely swing and a dog howling into the storm.  It was a wonderful time to enjoy the weather. 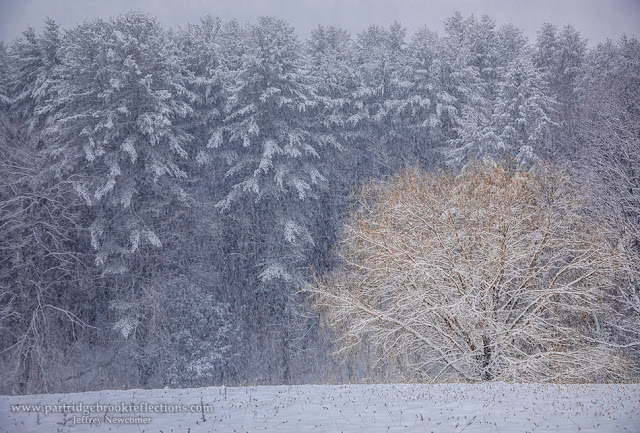 
I ended the day by running back to Keene to capture the fresh snow on the Central Square Christmas tree.  This is one of the best trees I have seen in years.  It is large, full, and the squirrels hadn’t (yet) chewed the wires on the lights.  A couple of nights earlier, I had captured some nice pictures of the square.  Everything was perfect, except for the unfortunate fact that the tree had no snow.  Early Tuesday night, the weather was varying between snow, sleet and rain, but there was still snow on the branches, and I had to make another try.  I kept my camera covered with a towel except when unveiling the lens for a shot.  The results were classic winter wonderland lights. 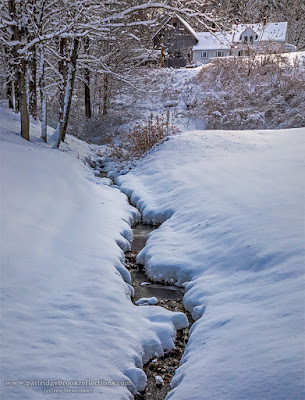 In the Dark
It was a great storm, except that when I got home I found that the heavy snow had brought a tree down on the wires near my home and snapped a couple of telephone poles.  This is rural New England and we are prepared for power outages, but the frustrating thing was that I couldn’t start working on all the great images that were languishing within my camera. 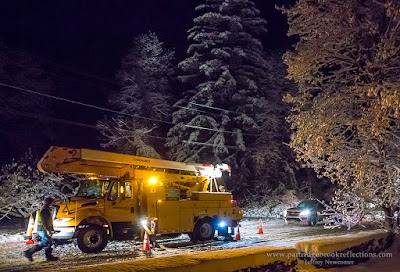 Over the years, we have experienced many power outages, but this was the first time I had the opportunity to watch the crews work to repair the damage.  I took all night and I can only say that I hope that the families of the repairmen appreciate the great work that is done by their men. 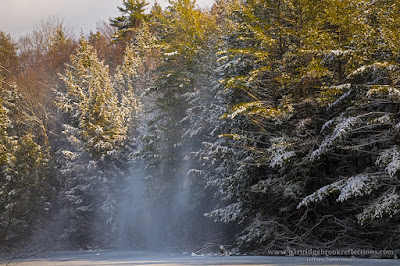 There is much more winter to come, and it won’t be long before we will begin yearning for the first warm breezes and fresh buds of spring, but, for now there is nothing that feels quite as fresh and exciting as the first tastes of white and the amazing New England Winter Wonderlands.

Posted by Jeff Newcomer at 8:55 PM