A NIght Out with The Photographer's Ephemeris

﻿
﻿There is a new player in town for locating the Milky Way and it turns out to be an old friend.

My usual approach to night-time photography begins with a determination of the time of the moon's rise and set, its location and phase using the remarkable Photographer's Ephemeris (TPE). The usual hot times for night photography are around the full moon and when the new moon leaves the sky dark for deep space observations. It is great fun to move my pin around the map looking for locations that will place the rising or setting moon behind interesting foregrounds.


Photopills
Recently I have depended on a different application to find the position of the Milky Way. In addition to the moon, our galactic 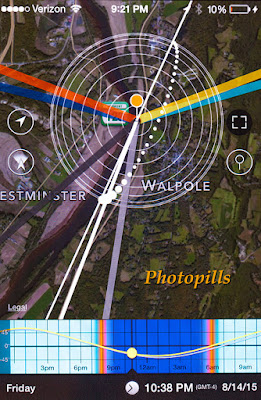 disk is the other major attraction of the night sky and the Photopills App does a nice job showing the arc of the Milky Way and the position and elevation of the impressive Galactic Center. The location of the Milky Way is portrayed with a series of balls with their position representing the orientation and elevation above the horizon. As the time line is shifted the "galactic Balls" move across the sky. The balls increase in size as they approach the galactic center. It works well to predict the best time and location to shoot the Milky Way, when the galactic Center is in the best position. It is a little awkward to jump between TPE and Photopills, but the new version of the Photographer's Ephemeris brings these two functions together.
The Photographer's Ephemeris 3.4

The Photographer's Ephemeris' latest version 3.4 is for devices running iOS 8.1 or higher. The App has a new night mode which shows the location of the Milky Way with a user interface essentially identical to Photopills. The Galactic balls are given an attractive 3 dimensional feel and the sky includes a few of the major constellations, but the overall UI seems based on the same concept. I'm happy that I don't have to learn a new system, but seriously, does TPE own Photopills or did they license the UI. Anyway, it's not my problem and I'm thrill that my favorite photo app now makes it easier to plan my night-time shoots all in one place.

A few days ago I used my upgraded TPE to find a viewing spot in Walpole for this month's optimal Galaxy viewing around the new moon. I found a spot on a bridge crossing the Connecticut River that had a nice view to the south. I was hoping that the trip further north would reduce the light pollution from Brattleboro Vermont and I was pleased that the horizon glow was a bit reduced.

Don't Try This at Home
TPE showed me that the Milky Way would be moving across the river between 10 and 11pm. I set up on the bridge and captured some nice views. The only major difficulty was finding 20-30 second time periods when cars and trucks were not speeding across the span with their brilliant headlights. There was precious little room on the side of the bridge and I made sure to flash all my reflective garments as the vehicle came rumbling by. You are welcome to lecture me about safety, but, if needed, I was ready to leap over the side and, since I survived, the pictures were definitely worth the risk.

Two Galaxys For the Price of One


The view of the Galactic Center to the south is the most spectacular portion of the Milky Way.  It is the perspective that dominates the vast majority of published Milky Way images, but, since you're out there,  I would suggest that you grab a few shots in the opposite direction.  This time of year the "tail" of the Galactic arch sits in the Northern sky and, although not as intense as the view around the Center, it has its own attractions.  The northern vista has a softer, less angry appearance with less galactic dust to cloud the stars, but my favorite reason for capturing this view is the chance to see the Andromeda Galaxy.  Andromeda is the nearest major galaxy to the Milky Way and the only galaxy visible to the unaided eye.  Even on a dark moonless nights, it only appears as a vague smudge of soft light, but, through a telescope, Andromeda can be seen to be more the six times the size of the full moon.  With the digital camera's the high ISO and prolonged exposures, this swirling mass of over one trillion stars becomes much more apparent.  The Andromeda Galaxy is more than 2.5 million light years distant from earth, and provides our best chance to look deeply back in time with our own eyes.  The light reaching us now left Andromeda when primitive humans first
walked on the earth.  In our expanding universe, Andromeda is on a collision course with the Milky Way, and is therefore one of the few blue shifted galaxies we can observe.  But you needn't duck yet, the galaxy is approaching at the relatively leisurely pace of 86 miles per second.  It won't get here for about 4 billion years and by that time the earth will have been burned to a cinder by our exploding sun.  Comforting thought!  Although it may make you feel microscopically small, it is still worth a peak to see our future companion in the endless void.

Choices
Anyway, I'm excited about the night features in TPE.   Version 3.4 of the Photographer's Ephemeris is available for free download and works for users running iOS 8.1 or greater. I reluctantly had to upgrade my iPad, but it was worth the hassle. For those unwilling to upgrade or who are running Android, Photopills is still a great option and has other features and nifty tools not available in TPE.  For me, The Photographer's Ephemeris' interface is cleaner and easier to use, but perhaps Photopills will come up with new features that will blow TPE out of the water. Don't you just love the free market system?  It's all good, and the software choices are infinitely better than those available just a couple of years ago.

Posted by Jeff Newcomer at 9:37 AM