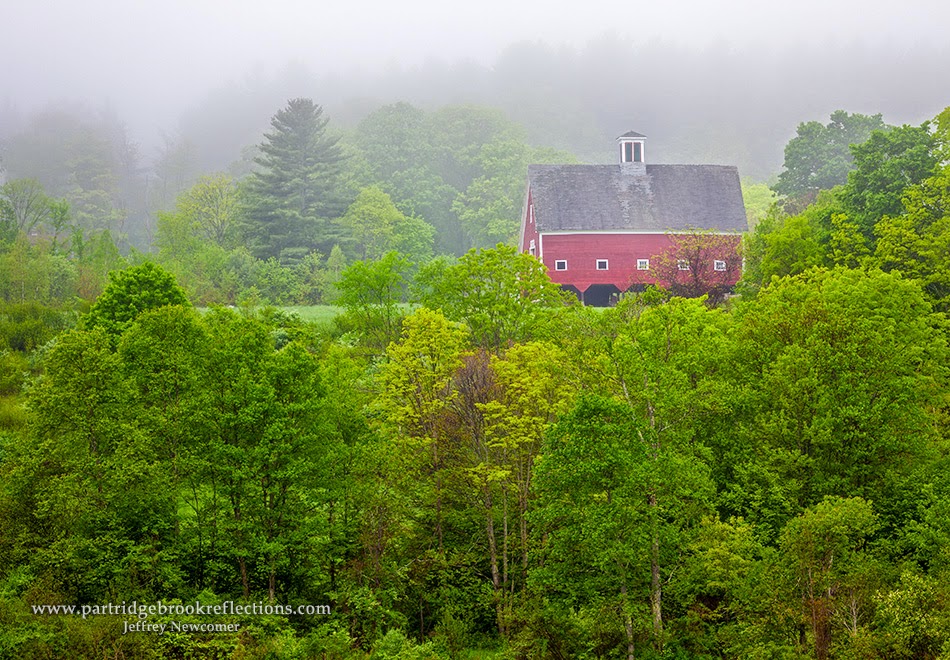 Wouldn't it be great if we could find a single law of
photographic composition which, when apply to every image, generates an arrangement of visual elements that are most pleasing to everyone's eyes? It is tempting to search for the magic formula in the wisdom of the great artistic masters or the beauty of fundamental principals of mathematics, but can this replace the "wisdom" of our own eyes. There are plenty of "rules" out there that for centuries have been used to define beauty and balance.  In photography, the rule of thirds has been the most famous. Many of the others guides appear to seek validation by adding the lofty adjective, "Golden"; The Golden Ratio, the Golden Spiral, the Golden Triangle, the Golden Mean, and as if Gold isn't sufficiently precious, the "Divine Mean". All of these guides have validity, but there are so many of them, they can't all dictate the perfect composition.


I've been aware of these various compositional guides, but I only recently noticed that my current version of Photoshop CC offers most of the common one as overlays for the cropping tool. It is amazing how it is possible to continually find new treasures in Photoshop, but actually some of these options have been available for sometime in both Photoshop and Photoshop Elements. I have routinely used the Rule of Thirds overlay, but other choices include the Golden; Rectangle, Triangle, and Spiral, as well as a simple grid and diagonals. If it is in Photoshop, it must be important. So where do these magic squiggles come from?

I've told the story before, but my first introduction to the Rule of Thirds bares repeating. Years ago when I was getting more serious about my photography, a gentleman approached to compliment my images. He particularly liked my eye for composition and my "effective use of the Rule of Thirds". I thanked him and then rushed home to look up "Rule of Thirds". All I knew was that I had a sense that the subject of an image looked better when it wasn't placed in the middle of the image. Who knew I was applying a "rule"?  Simply stated, the Rule of Thirds is a graphic representation of the observation that
subjects are more visually pleasing when they are placed away from the center and near the intersections of lines drawn to divide the image into nine equal rectangles. Studies have tried to find a psychological basis for this apparent preference, without much success. Perhaps our desire to move our attention away from the center evolved from a need to constantly scan the periphery for stalking lions. It's as good an explanation as any other.

It may seem that the Rule of Thirds is a somewhat arbitrary attempt to place key elements away from dead center. Many of the other compositional guides come from mathematical attempts to describe the "optimal" locations, but they all tend toward similar balance. As we discuss their archaic origins, it is important to realize that, no matter how thoroughly a guide is dressed in history and fancy math, the test of it's value must always come back the power of the composition as seen through the human eye.
Ok, with that off my chest, let's talk about the "Golden" Ratio.

The Beauty of Math

The Golden Ratio
Beginning from the first time that ancient man discovered that 1 + 1 = 2, mathematicians have found beauty in their numbers and the "Golden Ratio" may be the perfect example. The Golden Ratio has also been called the Golden Mean or the Divine Proportion. It dates back to several hundred years BC and refers to two measurements or line segments that have the relationship such that the ratio of the smallest number divided by the larger is the same as ratio of the larger number divided by the sum of the two numbers Easy huh?  Here is a situation in which a formula actually can help.

Stated in a formula where "a" is the larger number and "b" the smaller then:

The ratio can be illustrated with a line containing segments, a and b or with a rectangle built with the same components. 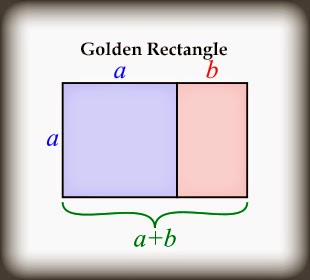 The value of the ratio of b to a is a irrational number which can be rounded to 1.6180. The number can be derived mathematically, but, we're photographers, not mathematicians and I won't try to slog through the proof. But, if you insist and want to sound smart, or nerdy, at your next party (depending on the party), you can always announce that, "the Golden Ratio can be derived from the limit of the Fibonacci Sequence".  And then walk quickly away.

Leonardo Fibonacci (1170 –1250) was one of the greatest western mathematicians of the Middle Ages. His sequence of numbers was created so that the sum of the any two adjacent numbers adds up to the next number in the sequence.

An interesting property of the Fibonacci Sequence is that,  as the numbers in the sequence increase, the result of dividing any number by the number preceding it asymptotically approaches the Golden Ratio:

Now that your success or failure at the next party has been assured, lets return to composition. 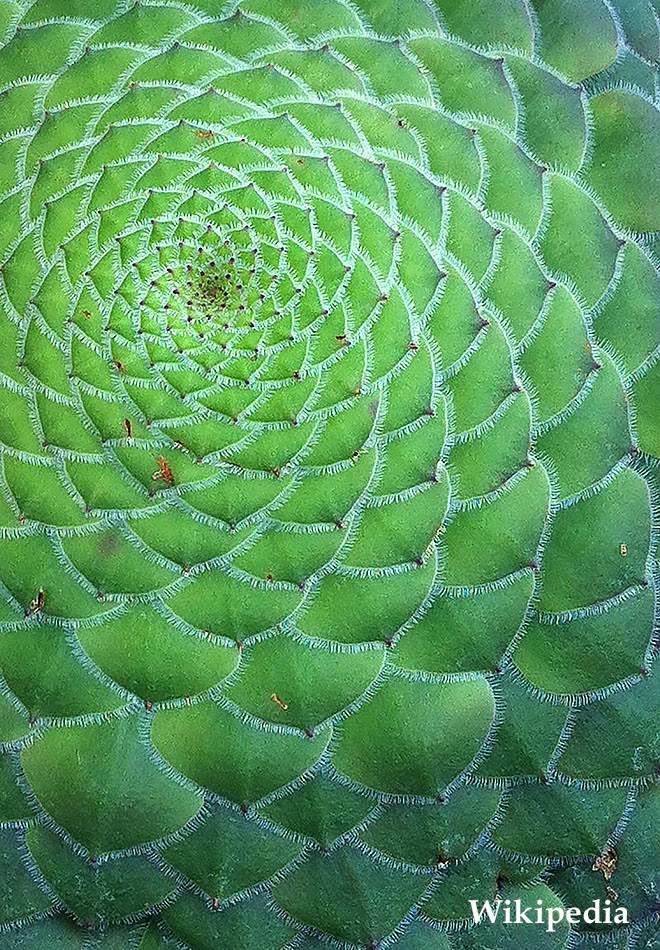 The Golden Ratio has such nifty properties, it must mean something in the real world, right??  Of course!  It has been argued by many that it is a fundamental relationship found in nature as well as in pleasingly balanced compositions and designs. It is true that, if you look hard enough, you can find an approximation of this value in nature such as in the distribution of the seeds of a pine cone or in the spiral chambers of a Nautilus, but this relationship is not to be found in many other manifestations of nature.  It may be that, in the natural world, the "Divine Proportion" is explained more by the Divine expectations of the viewer.


The Golden Ratio may not be magical, but over the centuries many artists and architects have felt that using guidelines based on the ratio to arrange the components of an image or design leads to a balanced and harmonious composition. The Ratio can be expressed graphically in a number of ways. 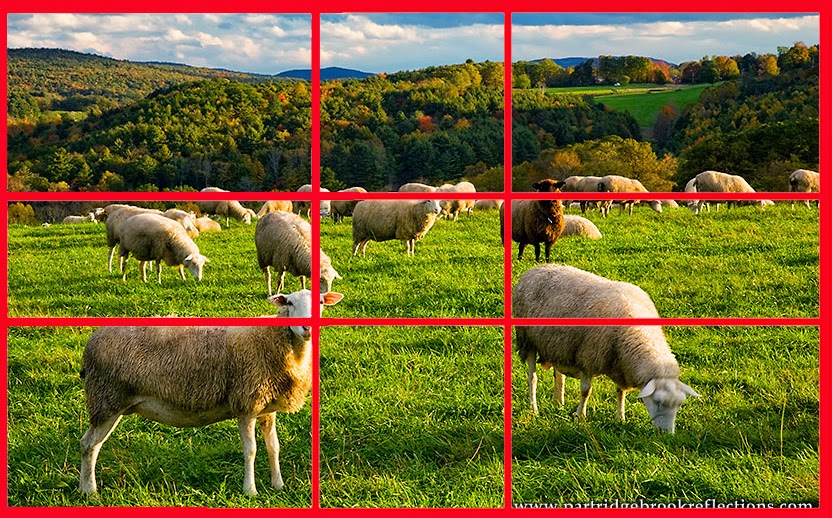 The ratio can be used to create a nine cell grid similar to the Rule of Thirds, but with the width of the center columns being smaller (0.618) than the columns on either side. The
result is a grid which brings the guide lines closer to the center of the composition. Whether this grid leads to a more pleasing composition than the Rule of Thirds is
a matter of personal preference and may have more to do with the context and subject of the image. In the iPhone picture of Abby and Grayson, I started by placing the upper lines of the Golden Rectangle and the Rule of Thirds at the level of the eyes. The second horizontal line of the Golden Rectangle Guide may have been better placed at the level of the chin, but I wanted to catch the tool in Abby's hand, so the Rule of Thirds won out.  There is a story behind this picture which includes a lens cap deeply wedged in the rocks, and the resourceful use of an improvised tool to achieve its liberation.  My thanks to Abby's freakishly long fingers and to the fishermen who let us use their steel hook. 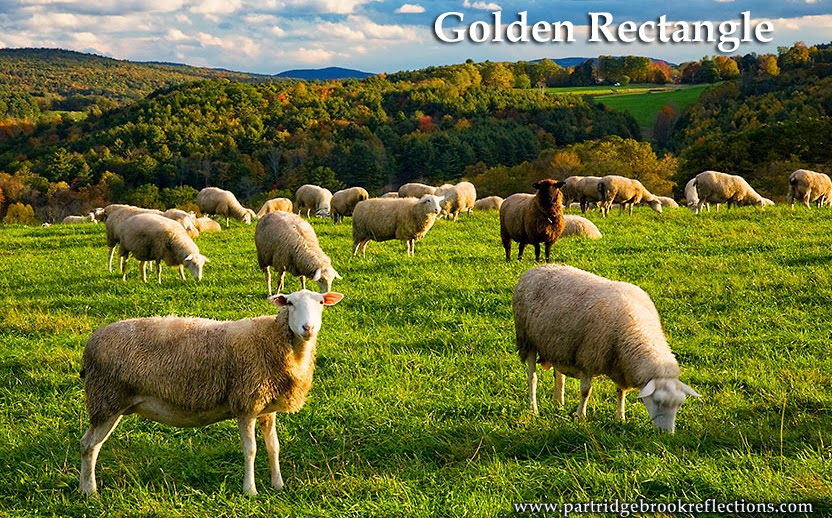 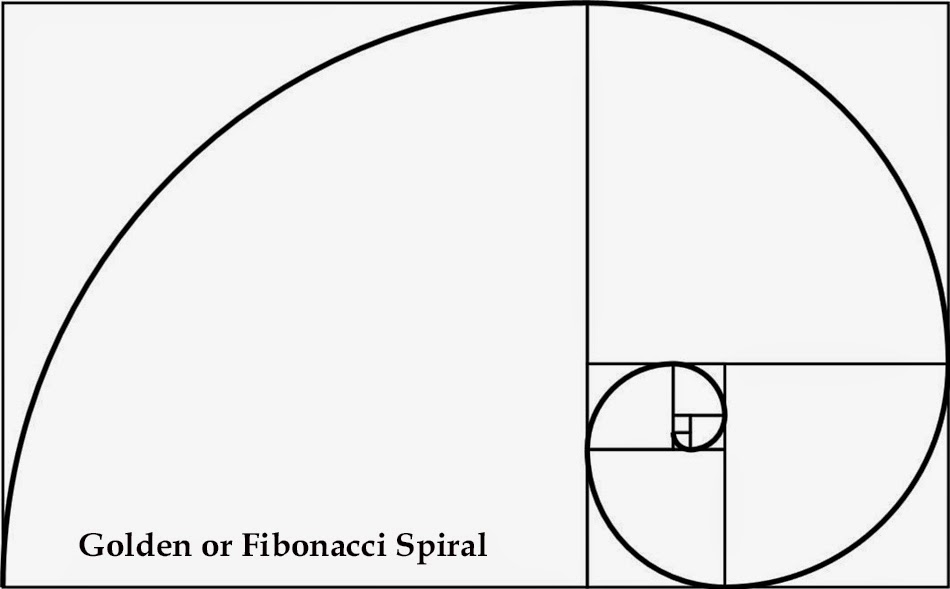 The Golden Ratio can also be expressed as a spiral created by an arcing line drawn successively through the square parts of nested Golden Rectangles. The line spirals down to a point which is felt to be a powerful location for the most important element of the composition. The composition is felt to be even stronger if the rest of the image seems to follow the spiral into the "Golden" Black Hole, as seen in the image of a juvenile Bald Eagle from Juno Alaska. 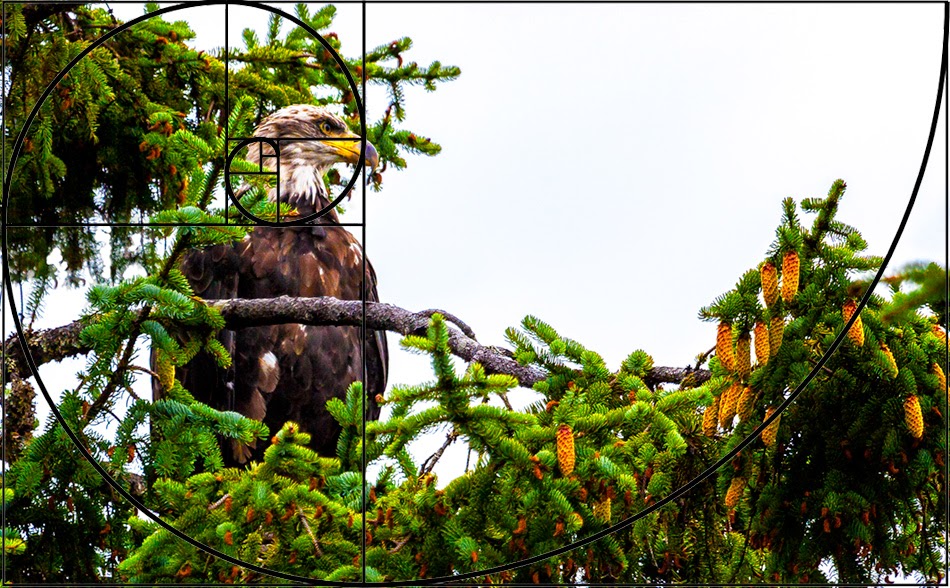 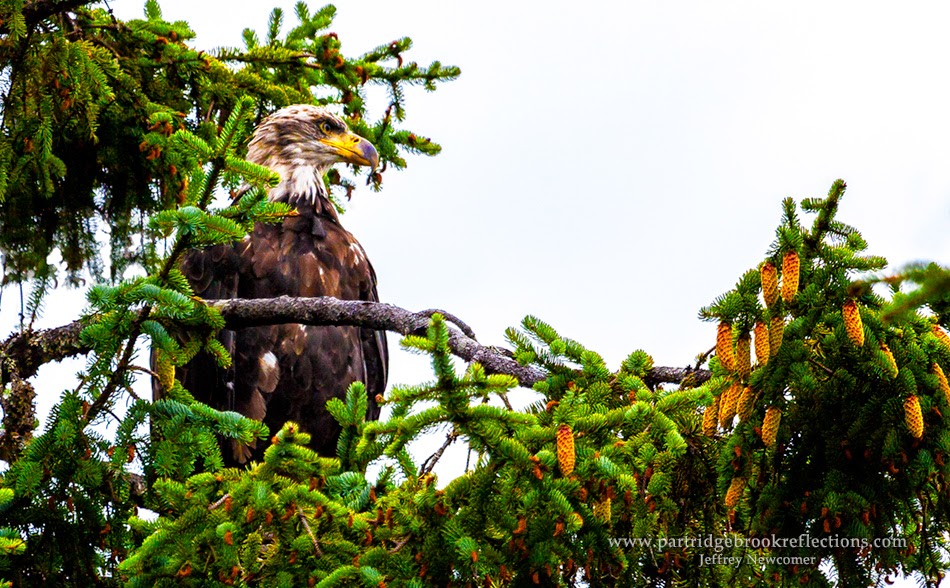 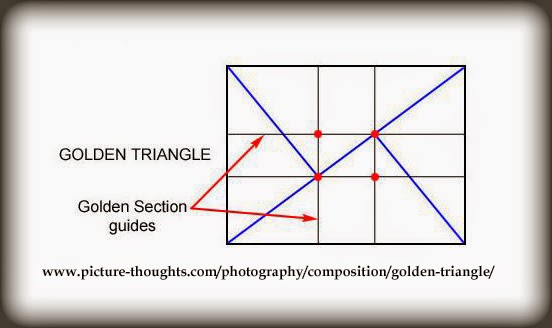 Images with prominent diagonals may benefit from following the paths of the Golden Triangle. In its simplest form the triangle is an isosceles triangle in which the duplicated sides are in the golden ratio to the smaller distinct side, but, for photographic composition, it is drawn with a diagonal across the frame and then lines from the other two corners drawn to intersect the diagonal at right angles. 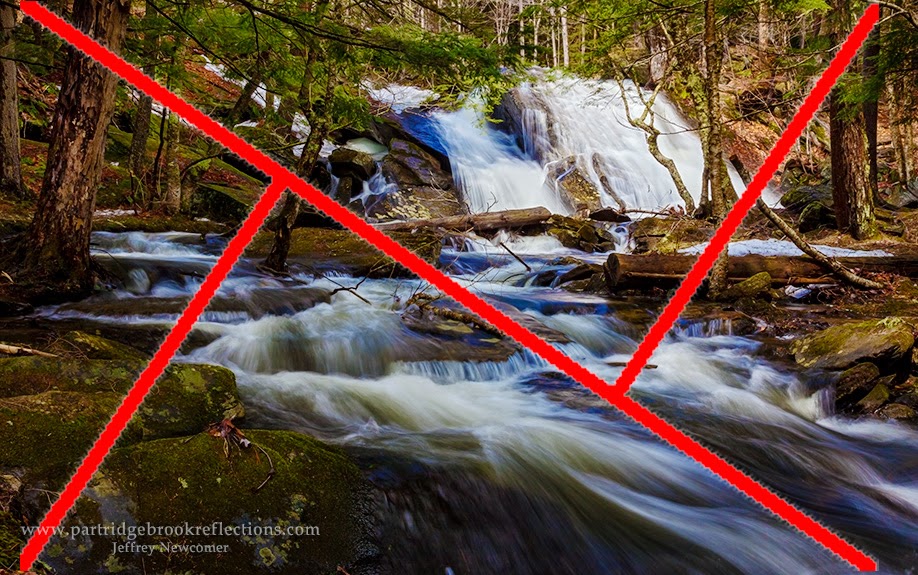 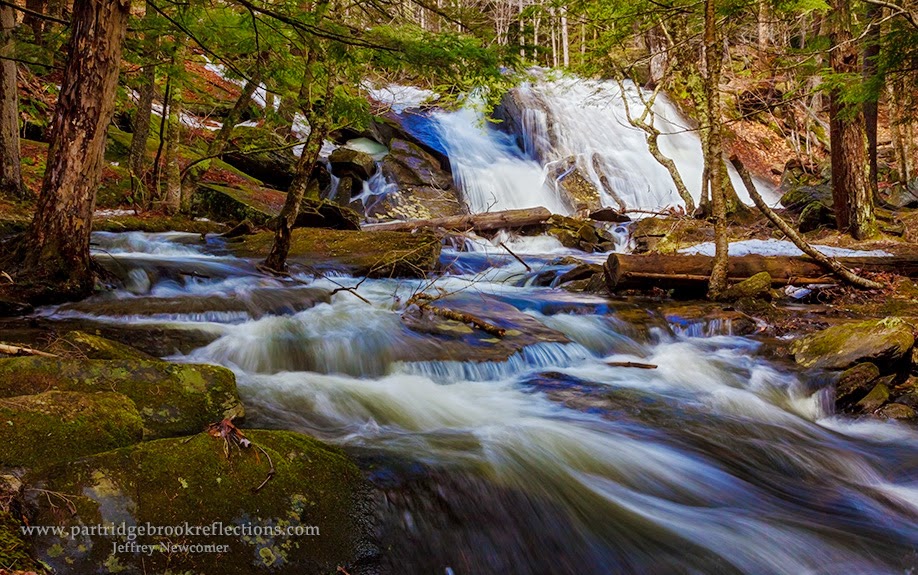 Any of these guides can be applied to an image during the process of cropping in newer versions of Photoshop and Elements. The
overlays can be selected from the tool bar and rotated to fit the image. Unfortunately, when superimposed on an image, the guides seem quite faint to my eye and for illustration I have created a series of guide layers that I can add to any image. With so many guides to choose from it is nearly always possible to find one that will fit any image, and that can be the problem. If we superimpose all the guides, it is hard to find a spot in the image that isn't close to a line or impaled by one or more intersections. I apologize for sounding too negative about the magic of these guides. They can help to focus attention on the importance of balance in an image, but they should never force you to alter what seems right to your own eye and to the message of the photograph.

For me the lesson here is really very simple and distills down to two basic guidelines. 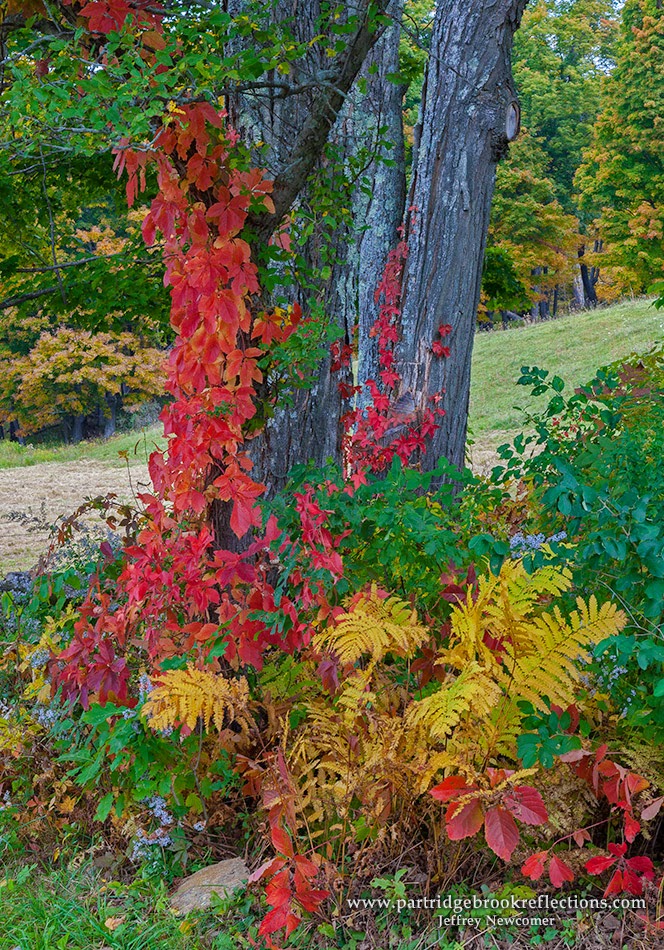 First, get the subject(s) away from the middle of the frame. Put the person or tree off to the side and the sky or ocean lines above or below the center line of the image. The Rule of Thirds and most of the other guides accomplish this nicely, but slavishly precise adherence to the lines is not necessary or always advisable.  Sometimes the best composition may focus attention on a strong subject by placing it unashamedly in the dead center.  Which brings us to my second and only absolute compositional rule.

Second, adjust the image to please your own eye. You can never make everyone happy, but if your image works for you, then you can ask for no better. At some point you need to throw away the guides and let the image speak to you. A simple set of lines on the screen can't know the importance and context of the various elements in the picture and that context can be the most important factor in the construction of the composition.

Thanks to Wikipedia for a number of the illustrations in this article.