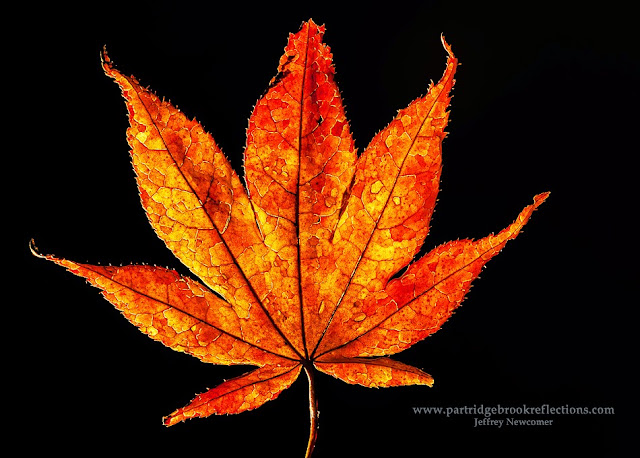 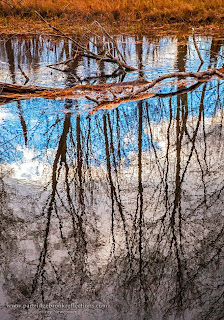 After last week's exhaustive and exhausting article about exposure, I through it would nice for me, and a relief for my readers, to write about something simple. For a landscape photographer there may be few things as simple as a single tree, but even with that narrow focus there is much to explore and this is especially true amidst the restless changes of a New England Autumn.

By the beginning of last week I had largely given up on brilliant autumn color for this year. I knew that I had to be satisfied with the dull, but persistent orange of the oaks and the occasional splashes of yellow from the obstinate Beech trees, but then I stepped out of my door and saw our Japanese Maple.


Over the years I have planted many trees around our house. A Red Maple, and a Norway Maple along our stone wall, 9 Apple and two 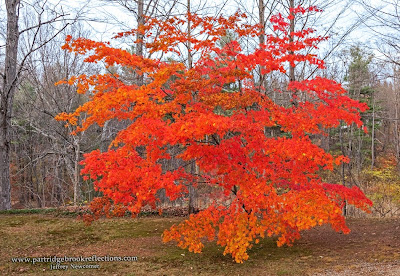 Pear Trees in the field across the street and a Birch that never really took off, but the little Japanese Maple was there when we moved in. Over 35 years it has thrived despite our general neglect and the fact that it is located in a shady north corner of our property which has been otherwise fit only for moss, moles and rotting firewood. The tree has survived these insults remarkably well, but I swear it hasn't grown an inch in over three decades. 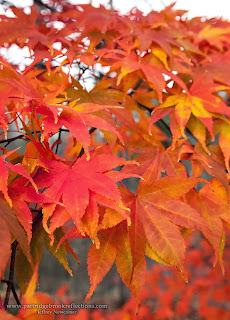 I assume that it is a dwarf variety, still standing only about 10 feet high, but this week, despite the general November devastation, the tree was aflame with color ranging from brilliant crimson to electric yellow. Obviously, I took a picture, but then I decided to capture the tree in more detail. Over this last week I tried to explore this brave little tree in a variety of ways. I followed the Maple's fantastically colorful show through to its remarkably sudden and inevitable surrender to the elements. What follows is a brief album celebrating that journey.


Full Color
At the beginning of the week the Japanese Maple was in full color and, despite the bare branches of trees all around, it was tenaciously clinging to its leaves. Seeing the brilliance of the reds in these 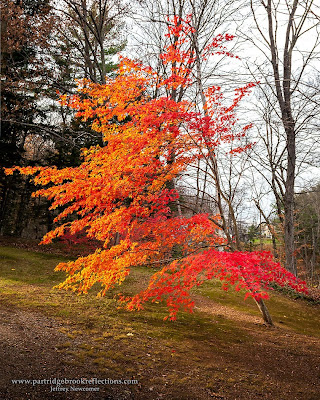 images, it would be reasonable to think that I had leaned heavily on the saturation slider in Photoshop, but in most situations I actually reduced the red saturation to bring the color into a manageable gamut. The color was really that bright. As I mentioned this tree is tucked away in a back corner of our property and it was a challenge to find angles that would show the tree's full glory. Most view points had backgrounds complicated by our house to the side or the gazebo in front. To get a clear view, I had to take down our cloth lines and found a side view which showed how the tree was leaning to the south in a desperate attempt to get more light. 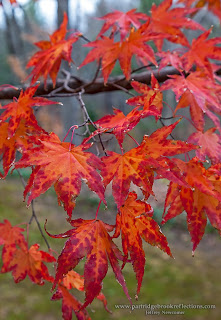 As I moved in closer I was struck by the wide variation in color and pattern of the leaves. This was probably related to the differences in the amount of light that struck various branches. Colors ranged from deep dark reds to bright yellows and some leaves had a stippled pattern of light and dark. 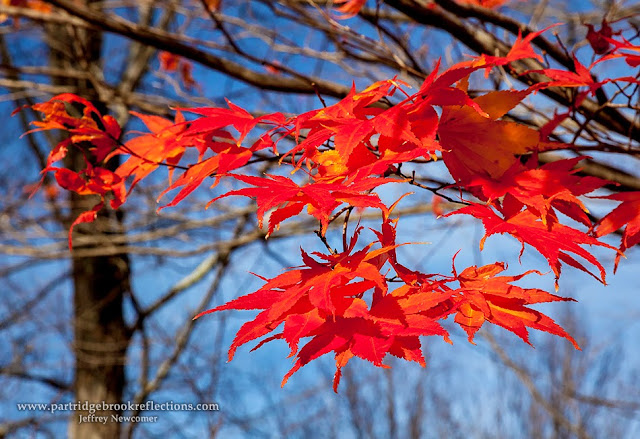 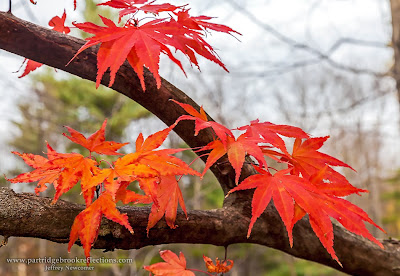 Over the next few days I had the opportunity to catch the tree in a range intensities and angles of light. In the bright light the transilluminated  leaves became electric, while with soft overcast the full intensity of the color could be seen without being muted by reflections. As always, my polarizing filter help to bring out the colors even in softly diffused light. 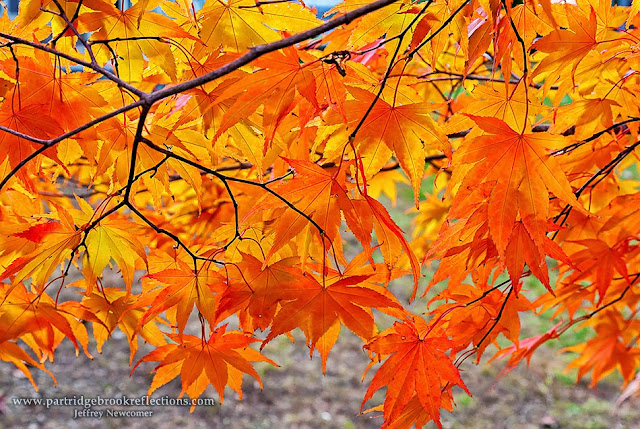 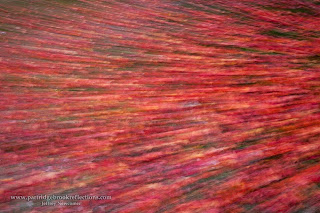 The leaves were remarkable, but as I began to feel that my leaf exploration was coming to a close, I knew that it was time to put the vegetation in motion. I experimented with sweeps, circles and jiggles, but my favorite was zooming. I liked the effect created when I started with a pause for a fraction of a second and then zoomed out. By using ISO 100, a small aperture and the polarizer, the shutter was slow enough to create the exploding color effect. It all comes down to experimentation and the willingness to take enough pictures for luck to kick in. 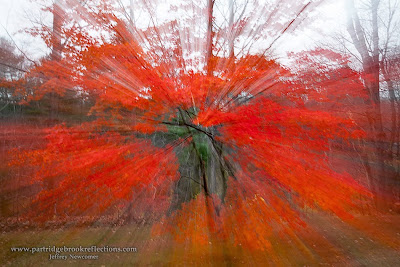 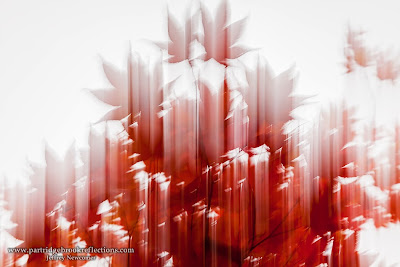 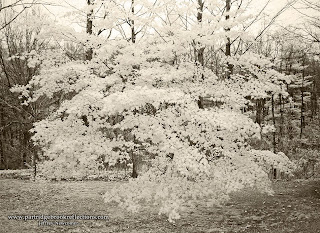 Whenever I think about looking at things with different eyes infrared immediately comes to mind. Whether the leaves are deep red, yellow or mid-summer green, in the infrared spectrum they all come out ghostly white. 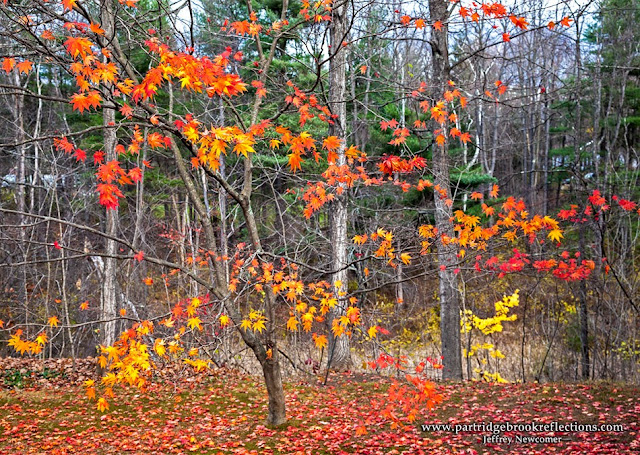 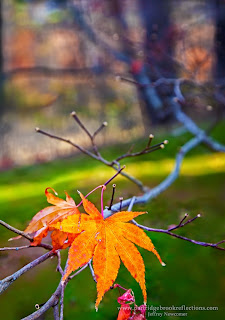 The late season color of our Japanese Maple was remarkable, but what was the most surprising was how suddenly the leaves all crashed to the ground. Essentially overnight the tree went from full bloom to nearly bare and without any unusual twist in the weather. No big storm or blustery winds to force the leaves to the ground. Apparently the tree just decided it was time. I was left with a few stragglers and a luxurious red carpet. 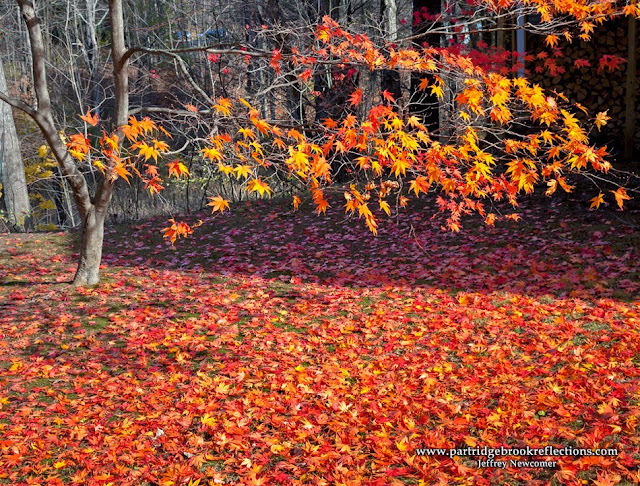 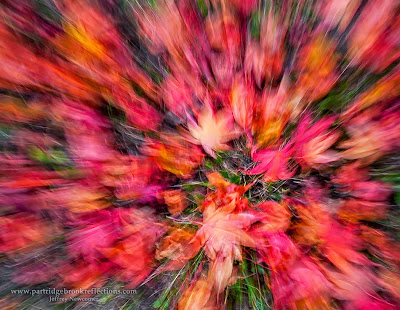 inevitable surrender provided a couple of important lessons. First, that with proper focus, even the largely barren November environment can still offer surprising splashes of autumn color and that color can be even more striking when contrasted with the somber melancholy of our "stick season". Secondly, given my tendency to frantically jump from one scene to another, it was good to be reminded that the exercise of restricting attention to one limited subject can refresh the eye and allow us to see in many new and surprising ways. 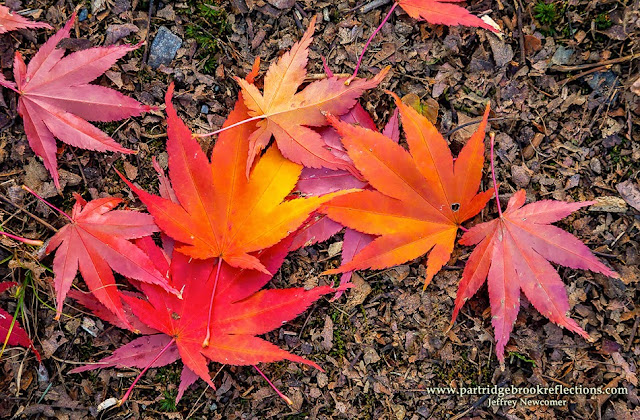 Jeffrey Newcomer
partridgebrookreflections.com
603-363-8338
Posted by Jeff Newcomer at 10:14 AM