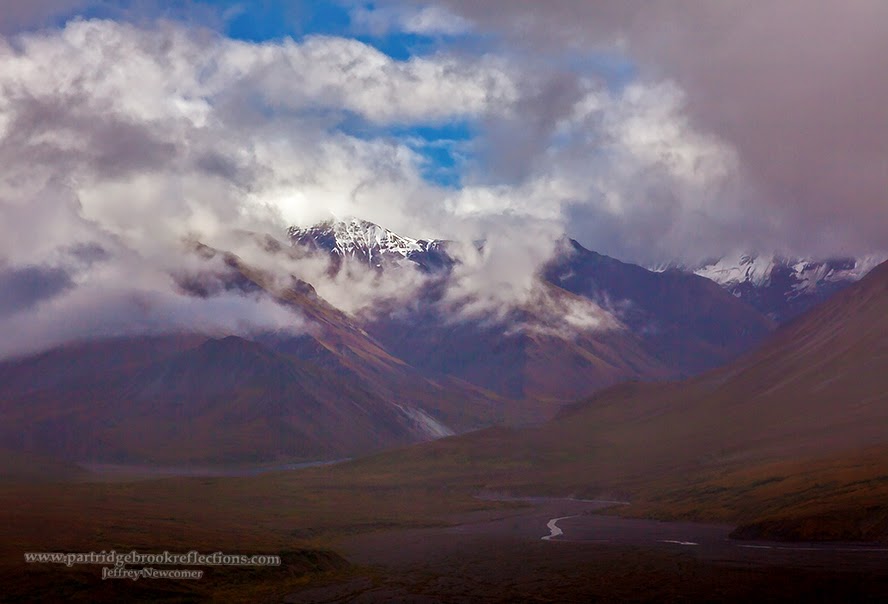 We have talked about visiting Alaska for many years. It is a long way and not inexpensive, but we finally decided to save up and take the plunge. Our trip is quite busy and, so far, we have ended ﻿﻿﻿﻿


﻿﻿﻿﻿days happily exhausted with little energy for photo processing. I have been faithful at downloading and backing-up the images and I've tried to keep up with labeling while the information is still fresh, but at about that point I have generally been ready to collapse into bed. In the first four days of the trip I have already amassed over 1000 images. I will have a pile of work to do 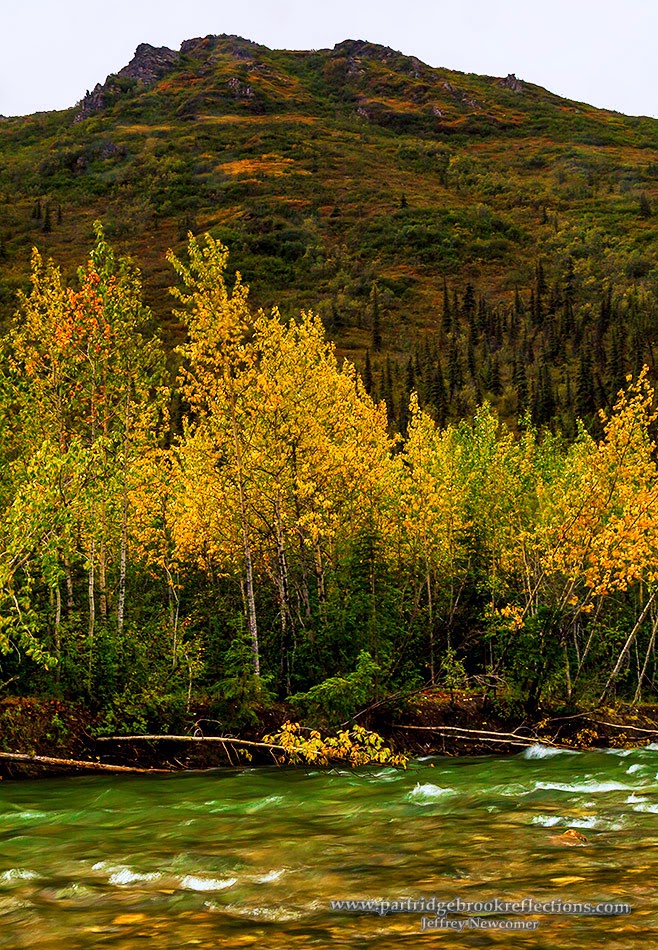 when we get home and we will be getting back just as the foliage season begins. While traveling, I'll try, when possible, to share a few of my favorite pictures and experiences. I'm starting this article while doing a couple loads of laundry and enjoying breakfast. at the "Suds & Sip" in Seward. The idea of a combination Laundromat and cafe seems infinitely practical. Susan is thrilled with the chance to start fresh with our clothes and we have the morning to explore the town before we take a hike onto a nearby glacier.


Our flights to Anchorage was long but uneventful. We got in late in the day, made later by four hour time difference. Anchorage is an ordinary moderately sized city surrounded by dramatic mountains. This one city contains nearly half of Alaska's 730, 000 residents. The next day we headed up to Denali National Park and Preserve and for the first time we became aquatinted with the predominant factor for the first week of our trip, rain. The overcast and rain was, more or less, a constant presence although it never was heavy and tended more toward mist. The weather didn't prevent any activities, but it did affect the photography. Much more moody layers of clouds than brilliant blue skies. The mist provided a soft light that had its own attraction, but sadly we were among the 75% who never saw Denali (Mt McKinley).

Denali is a 6 million acre wilderness preserve whose dimensions 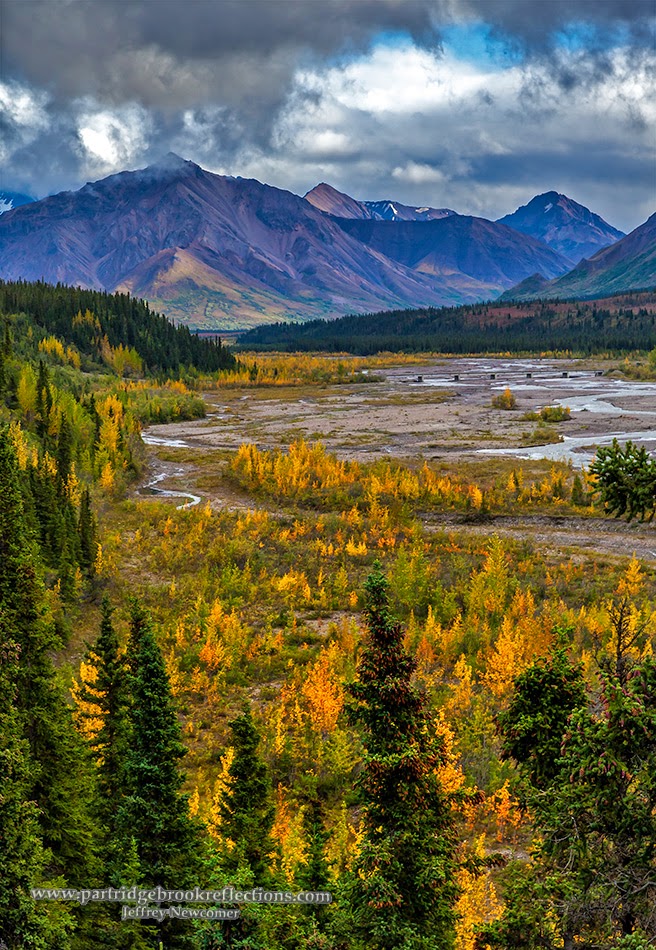 are impossible to truly comprehend. Unlike overcrowded parks such as Yellowstone and Yosemite, Denali has been zealously protected from human incursion. The Park has only one road which penetrates 90 miles into the wilderness. Some years ago the road was largely closed to private vehicle traffic and now, with the exception of a few rare permits, access is by either National Park buses or private tours. I never like being trapped on a tour bus. I hate being forced to follow someone else's schedule and I go crazy when I don't have the freedom to stop whenever I see a a promising location. Despite all the frustration, the buses in Denali did provide some important advantages. First it is important to have a cooperative and knowledgeable bus driver. Our's was very responsive to requests to stop whenever wildlife was spotted and he knew precisely where we were most likely to see the animals. Other significant advantages of being in a bus include the availability of many more eyes to scan the hills for the often distant fauna and the fact that the bus provides a taller viewing platform than the average car. Anyway photography is all about managing with the conditions and on this day the conditions included overcast and misty weather and viewing through a grimy bus window, which, thankfully, dropped down for clear viewing.

Despite the challenges the trip was amazing. We bumped along 90 miles each way over the narrow dirt road, often clinging

precariously to the sides of steep mountains. We traveled over a succession of mountains and through deep valleys all with no other sign of human impact. Along the way we found all of the expected wildlife. Moose, Caribou, Dall Sheep and Grizzly Bears were spotted, although the animals were often seen from a distance. I was very happy to have my 100-400 mm zoom. I could have added a 2x Tele-Extender, but I found it more than sufficiently challenging trying to hold 400mm stable out the window of a bus which stopped, but never ceased rumbling. With a sufficiently fast shutter speed and the use of Susan's small back pillow to dampen the vibration, I was able to capture some reasonable images, but I would have loved to have been able to use my tripod. The challenges of the distant animals was more than offset by the endless succession of dramatic landscapes at every turn. The overcast weather was a disappointment and, sadly, we never saw Denali, but the low cloud layers provided a dramatic, migrating veil to the peaks. The sky partially cleared on the trip back and we were luck to catch a fleeting rainbow. The next day we were heading for Talkeetna, but before turning south we returned to the park and drove the first 15 miles of the Park Road which is open for private vehicles. The day before I had seen a collection of brilliantly yellow poplars in front of a rock outcropping on the Savage River at mile 15, but I had missed the shot. The weather was still overcast but we were able to hike along the river and I got the image I was looking for. 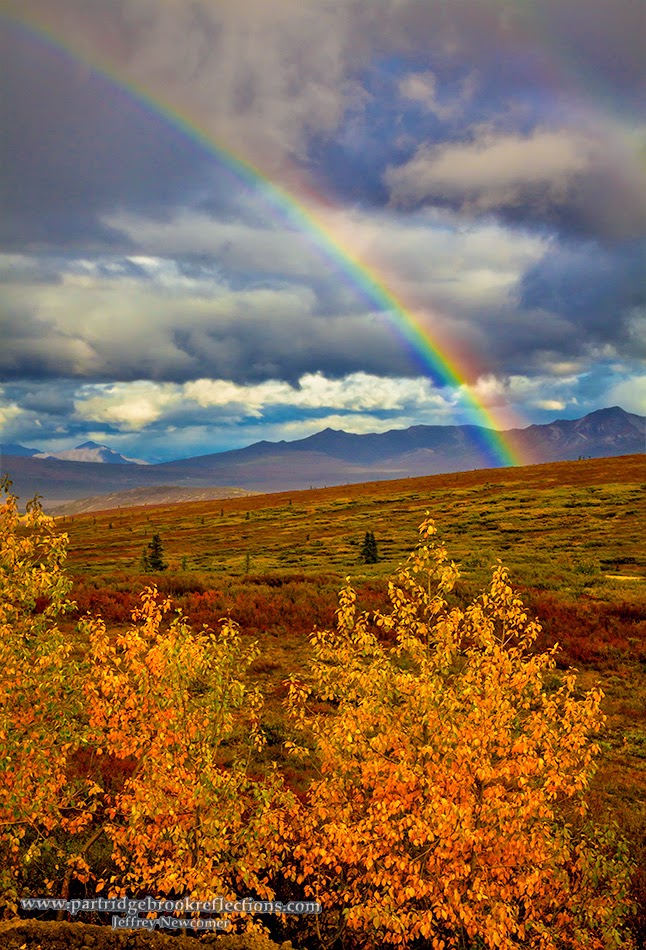 On neither day in Denali did we get a good image of a Moose, but on the drive to Talkeetna we came across a Moose with two young calves right on the edge of the road. It just proves that the wilds of Alaska follow no artificial man-made boundaries.
﻿﻿ 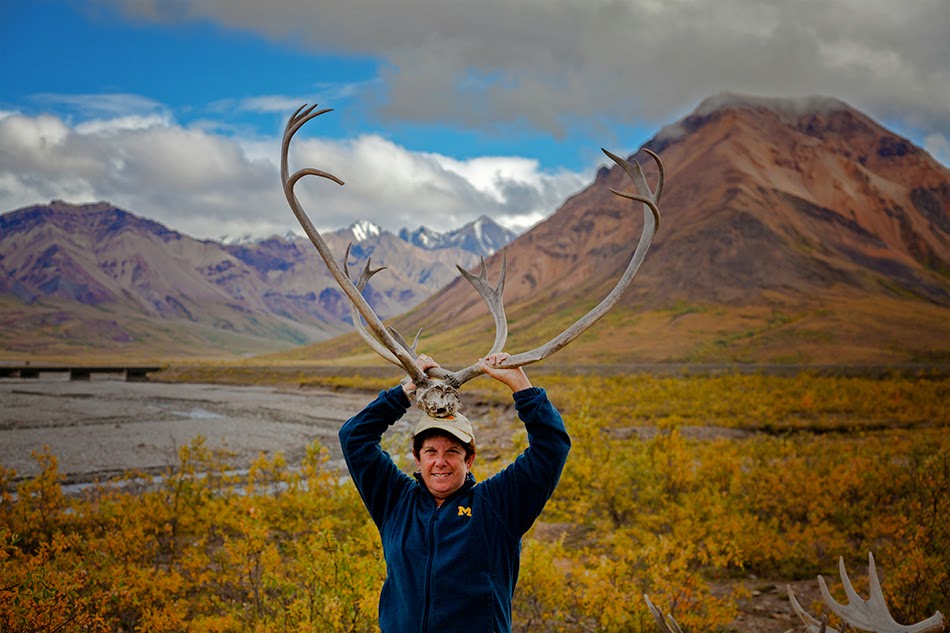 I will try to post more images as we continue on our travels, but, for the rest of our time in Alaska, we will be on a small boat plying the bays and Fiords of Southeast Alaska. Internet access on the boat promises to be expensive or nonexistent and so this rushed posting May be my last from the trip. I guess I'll just need to be satisfied with a fantastic experience.
I apologize for the roughness of this blog.  I am stealing wi fi from a café in Pertersburg and my battery is about to die.