More than a Snapshot of a "Beautiful Thing"


As I see it, one of the most important aspect of strong images is how the subject is placed in the context of its surroundings. The web is full of photographs of "beautiful things". Soaring mountains, rushing rivers and placid lakes, all make wonderful subjects, but too often the photographs are merely pictures of the "beautiful things" without using the surrounding to support and highlight the visual and emotional position the "beautiful thing" holds in the environment. To me a photograph without the effective use of context is a snapshot. It is how the context is incorporated into the image that is an essential part of strong composition and it is how a snapshot can be elevated to a meaningful work of art.


Last week, I highlighted the classic Dummerston Covered Bridge in my celebration of the attractions of that lovely Vermont town. It got me thinking about what makes a covered bridge visually interesting. I’m a big fan of these unique examples of utilitarian
beauty and it doesn’t take much to get me excited about photographing them. But why did our ancestors cover their bridges in the first place. Certainly it was not to attract tourists to wander about, reveling in their charm. It wasn’t, as is popularly assumed, to protect the people and horses crossing on the bridge, nor was it to keep snow off the floorboards. The fact is that, back in the days of untreated lumber, the major supportive beams and trusses of a bridge would last only about 10 years, but protected from the harsh New England elements they could last for centuries. Our ancestors were smart and practical folk and didn't want to replace the bridges every decade. We are lucky that the result of their practicality is that, we, in New England still have hundreds of bridges to photograph.

Covered bridges are often visually stunning with powerful lines and brilliant color, usually red, against the stark New England backgrounds, but for me, the essential element in a great covered bridge image is the context. Taken by itself a bridge is interesting, but largely one dimensional. Perfect light can help, but what brings it to lif is its surroundings, how it fits into its environment and makes functional and artistic sense. When I start shooting a bridge my first thought is how to harmonize the structure with complimentary foreground and background elements. I often spend more time studying the surroundings than the bridge itself. Fortunately, bridges, doing what bridges do, are seldom devoid of context. The key is to find and use the context effectively.


Flowing Water
Bridges are, almost always, built to span water, usually a flowing brook or river, and this provides a reliable source of context. I typically look up and down stream for perspectives that draw the eye
to the bridge. Often the stream is the only place offering an unobstructed view of the entire  structure. With long exposures, the soft texture of flowing water can contrast nicely with the hard angular nature of a bridge. Sometimes it is the stream that becomes the center of interest with the bridge serving as a supportive background.

For some bridges, the best solution is to set the structure against a broader landscape of mountains and sky. The classic example of this is the Flume Bridge in Lincoln, New Hampshire. The bridge is shown to its best with the 5089 foot Mount Liberty looming majestically in the background, especially when the mountain is snow capped or engulfed in a riot of autumn colors. When broad views are unavailable because of surrounding foliage, trees and roads may be used effectively to frame and draw the eye to the bridge.

My favorite context is when a covered bridge is part of a classic village tableau. There may be no more quintessentially New England country scene than a covered bridge nestled among pristine old houses and the perfect village church. Fortunately, New England is rich with examples of the “village” bridge. A few of my favorites include the Stark Covered bridge in Stark, New Hampshire, the Green River Bridge in Guilford, Vermont and the West Arlington Covered Bridge in Arlington, Vermont. The challenge is to arrange the elements in a comfortably balanced composition. Sigh! Now all we need to do is clone out all those ugly wires and the *&%$ satellite dishes. Postcard here we come! .

People (ugh)
A bridge is designed to carry people across something, and images 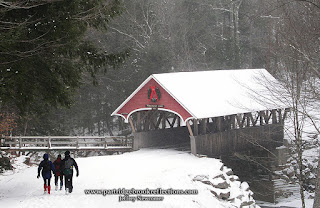 of a bridge being functionally bridge-like can be effective. Definitely not cars: ideally an ambling horse and carriage, but I will accept the occasional walker or biker as long as they are not wearing heavy metal tee shirts. I have to fight my natural urge to clone intruders into oblivion, but magazines often like to see people in their pictures, and occasionally the commercial urges take over. Photographer Ned Therrien once told me that he often brings a wardrobe of classic country clothing to a shoot, placing himself or his wife, properly attired, into the scenes. It’s a great idea, but, like many of us, I became a photographer to avoid being in the picture!


So get out and shoot those bridges. Just remember that it is the context that changes a snap shot of a pretty bridge into a meaningful portrayal of New England country life.