Who Needs a Tripod?

I Do, but Sometimes I Have to Make Do

﻿
﻿I have been struggling to get out to enjoy and photograph the beautiful New England spring colors. This weekend has been consumed with moving our son Jeremy to New York
City. Two weekends ago we were visiting our daughter in Washington DC and much of the week after that I was tied down in a conference in Boston from dawn to dusk. I love Boston in the spring, but it was frustrating to be watching it from inside the Sonesta Hotel along the Charles River in Cambridge. I got out when I could, mostly in the evenings, and I was blessed with a couple of clear nights to play with city light photography.


One secret to good city lights photographs is to get there at twilight. You want to have a little light remaining in the sky. A completely black sky is uninteresting and also renders anything which is not illuminated hopeless dark. The smooth, deep blue sky provides a lovely contrast to the specular lights from the buildings.

The Light Won't Wait
On my way back from dinner one night, I realized that the light was perfect. Just enough color in the sky, with the lights of the Boston skyline shinning through and reflected in the Charles River Basin. The Longfellow Bridge, also known as the Salt and Pepper Bridge for its distinctive towers, stood out in nice relief. Thankfully, I had my camera with me, but I knew that if I ran up to my room for my tripod, the twilight would be gone. I had to make do with sources of stabilization that were at hand and then use all the available camera controls to get the shutter speed down to something that an old guy like me could reasonably hold steady. It is amazing how many control are available on a digital camera to optimize low light, hand-held images. On this night I needed all of them:


Making Do
I started by looking for something for external stabilization, and found a part of the railing that nestled the camera nicely.  If it wasn't so blustery and cold, and the rail wasn't so dirty I would have balled up my jacket to provide a "bean bag" effect to further damp vibrations. Nestled on the railing and using image stabilization, I decided that I could steady the camera for sharp exposures of no longer than about 0.5 seconds, preferably less.

Thankfully my 5D Mark II can do a reasonable job at higher ISOs, so I cranked it up to 3200. I didn't need crazy depth of field to keep the boats and skyline sharp. f 4.5 worked well and with that I achieved my 0.3 second shutter with reasonable detail in the darker regions.

from pressing the shutter would be impossible to control. The solution was to set a 2 second shutter delay giving me time to steady the camera with both hands. 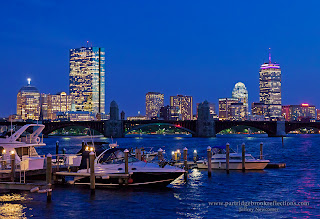 I held my breath and shot. It was important to take many images with the same setting, since, despite my best efforts, most of the pictures were still blurry, but a few were acceptably sharp.

Enjoying Mistakes
I got what I came for, but as I looked at the other failed images, I
discovered some were actually interesting. I especially liked the one that was probably my worst early attempt at stabilization. This one proved to me what I already knew. There is no way to hand stabilize for a 5 second exposure. The squiggles reflect my poor technique and the coffee I had after dinner. This is almost diagnostic of a three cup indulgence, but I swear I only had one. Regardless of the process I really like the festive, Christmasy appearance. So I decided to try a few on purpose.

I concentrated on trying to do zooms. The trick was to allow a longer exposure and to start zooming the lens before I hit the shutter. Here again, the lack of a tripod was a issue, but, in these free flowing images, the lack of precision was not much of an problem.

I finished with a few more straight images pulling back to include
the railing and walk-way. Here I braced the camera into the side of a tree. Again, many failures and a few not so bad. I even caught one with a woman walking on the path. Happily, her movement created a ghost-like effect that blurred the lovely, but suspicious look on her face.


I would have loved to have had more time to capture Boston in bloom, but as always the challenged was to make the best of any situation. In a way it can be more fun to make do and the results can be even more rewarding.
Posted by Jeff Newcomer at 12:47 AM