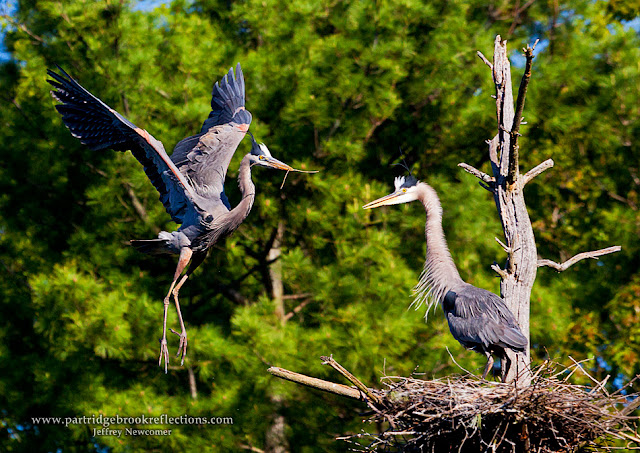 The news is that the Great Blue Herons are back in their nest on Harvey Pond in Westmoreland New Hampshire. We missed them last year but when a picture of them settling in showed up on Facebook I ran over to see for myself. People must be tired of my protest that I am NOT a bird photographer, but I have found that recently my gaze has risen more often to the tops of the trees. I’m still not willing to freeze behind a blind for hours, but the Heron are spectacular birds with an almost pre-historic appearance in flight and more importantly they provide a very civilized viewing experience.


I first saw the Herons on Harvey Pond two years ago. I camped out a couple of times by the road with a clear view to their nest high up in a dead tree that had been drowned by the pond years ago. I trained my 400mm lens on the nest where there was always one of the parents watching over
the two chicks as they became more active. I discovered I could relax in my car with the camera on my tripod shooting bursts of images whenever things became interesting. My only challenge was avoiding falling asleep. I quickly discovered that the real action occurred about every 45 minutes when the heron that was out hunting returned to the nest to elegantly regurgitate its catch into the gaping mouths of the ravenous kids. My best shots were of the birds as they arrived at the nest and the interaction between the parents as they switched roles and the other headed off to hunt. The heron approach the nest swooping up from below and float briefly
before settling into home. Even while taking advantage of these fleeting pauses in the action I still had to turn up the ISO to 800-1250 to allow a sufficiently fast shutter speed to freeze the motion. With my lens pre-focused on the nest I didn’t need to stop down to get adequate depth of field and locked down on the tripod,  I could turn off the image stabilization.

It was fascinating to see how quickly the chicks grew in both size and boldness. In just a couple of weeks they were pushing the boundaries of their nest. I missed their first flights, but I hope they did well.


Sadly the herons were missing last year. I wonder whether this is the same pair, returning after an ill-advised experiment into an alternative life style. Perhaps they were on sabbatical studying yoga in the Rockies. Whatever , we are glad they are back, and it was a joy last weekend watching them meticulously work on enhancing the nest. There were no chicks visible, but the popular opinion is that the eggs have already been laid. 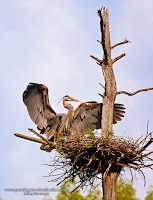 One of the greatest attractions of such a well known location is the opportunity to learn from other observers who are much more familiar with bird photography. The chance to chat about equipment and technique filled the long intervals of inactivity. It can be frustrating however, since, upon arrival, they invariably told me that I had just missed the best opportunities to capture the action.

Although it is natural 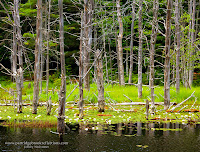 focused on the dramatic Herons, I had to remind myself not to miss the varied natural beauty and wildlife which is part of a New England bog in the

spring. The lily pads were spreading across the shallow areas of the pond forming a multicolored carpet against the reflected shades of green from the surrounding trees, and the 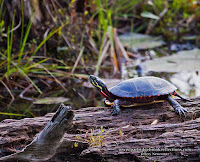 skeletal ranks of  drowned trees  provided striking contrast to the soft spring tones. Turtles were sunning themselves on almost every exposed log and the Canada Geese seemed to be saying “hey what about us” as they splashed down and came right up to the bank. On rarer occasions otters or deer might venture to the water's edge.


I'll be returning every few days to check on the progress. The photographic opportunities are great, but even more exciting is the chance to learn about the behavior of these magnificent animals. If you come by to see the show, please be as quiet and unobtrusive as possible.  Frequent human disturbance can lead to nesting failure. The only thing visible last evening was the head of one of the parents as it was settled peacefully down into the nest. All-in-all a good sign for the future.