Since hanging a show of my Atlantic Coast images in Portsmouth, NH, I have been wandering through my archive of other seacoast pictures that I never got around to working up. I am always amazed at what I find during these explorations. A fresh eye invariably leads to fresh revelations, "How did I miss that one". An example is the picture of a seagull perched on the public binoculars at Nubble Light on Cape Neddick Maine. Gulls seem to enjoy displaying themselves here as they await donations from the crowd, but, for me, this was the first time I was able to catch the bird against the lighthouse before it flew away. Great, but there were a few problems, and since I live in the great western wilderness of New Hampshire, far from the coast, I had to grab what I could get and then deal with it the best I could. Coming back 10 times until all is perfect could not be a practical option. 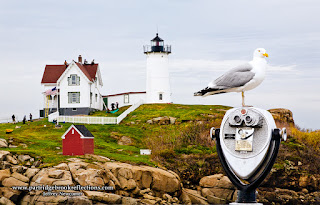 So here were the issues with the captured image:
1. First, and most obviously, the lighthouse was crawling with workmen. It seems that whenever I visit an iconic location the scaffolding has just been erected.
2. The day was a bit overcast making it impossible to capture adequate depth of field while still freezing the gull's persistent movement.
3. The sky was a bit flat in the raw images.
I suspect it was these challenges that initially led me to set this image aside, but I may never catch the gull in this spot again, so I finally dove in.
The second and third problems were relatively easy to overcome. The depth of field issue was handled by blending two images, one focused on the gull and the other on the background, I believe I had the camera on a tripod making the registration of the two images fairly simple. I spent some time carefully adjusting the selection to make a seamless transition between the bird and the sky and only a few small areas needed to be cloned where the gull had moved his head. 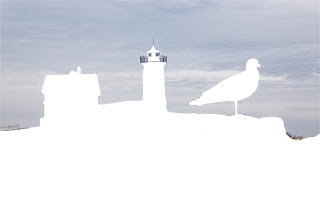 There were a number of approaches available for the flat sky. I chose to use photoshop's magical Shaddow / Highlight adjustment to restore the original color and contrast and then used a selection to isolate the effect to the sky. I could have double processed the image in RAW or used HDR but Shadow / Highlight worked nicely and was much easier.
The first problem was by far the most time consuming. There is a wonderful catharsis that occurs when you can nonviolently clone away the one meandering duffus who will not move away, and who is spoiling your perfect, award winning image. But in this situation I had nine duffi (?), two ladders and various junk that showed no inclination towards vacating until quitting time. So I made some coffee, adjusted my chair and settled in for some painstaking cloning. Easy areas involved cloning in a little grass, but where objects overlay the house, I had to find sections of clapboard or roof shingles that exactly matched the background. It took an hour or so, but I think the result transformed an interesting photo documenting the restoration work on the lighthouse into an image capturing the iconic nature of this classic structure. I also enjoyed flipping back and forth between the unedited and edited versions of the picture to see all those hard working folks flash in and out of existence! 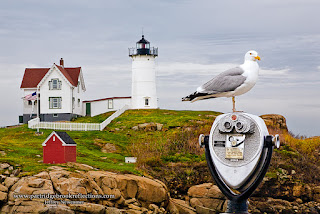 I have heard photographers who I greatly respect proudly announce that they work to "get the image right in the camera" and insist that they will bypass any image whose editing could not be completed in 5 minutes or less. To me "getting it right in the camera" in the digital world means something quite different. I work hard on location to capture the image that will give me the best chance to craft a final picture that is the purest representation of what I saw and felt while viewing the scene. Often that involves bringing home a picture file that will not look its best straight out of the camera, but will give me the best raw material for all the assets of the digital darkroom. Ansel Adams famously said that the negative should be considered the score and the print as the performance. In the digital world the image file is the score and the best performance comes from intelligently using the remarkable tools we have available, even if it takes more than 5 minutes.
Posted by Jeff Newcomer at 1:52 PM