Last week we visited our daughter Abigail in Washington DC. Now that she is living and working in the capital, we have taken advantage of this great excuse to explore the special attractions of this unique city. It has been an opportunity for me to get a break from my usual landscapes and, last week, a chance to get a sizable jump-start on spring. In the 4 days we visited the National Portrait Gallery, National Zoo and traveled up to Baltimore to see the Red Sox play (and lose) at Camden Yards. One evening Abby insisted that we tour the Washington Memorials and this turned out to be the most inspiring and photographically challenging part of the trip. 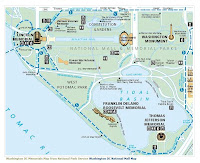 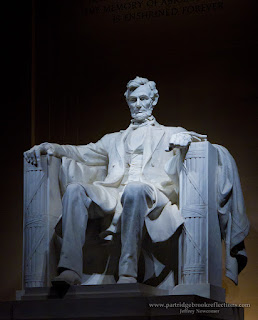 The Washington Memorials at night are wonderfully silent and peaceful without the large crowds and the lighting creates a mystical aura. In Washington, It is hard to spit without desecrating a national treasure, but the loop around the Washington, Lincoln and Jefferson Memorials is the most dramatic. Getting a late start after a wonderful dinner, we could only complete a portion of the loop. Sadly, we missed the Vietnam and World War II Memorials. We started at the Linc 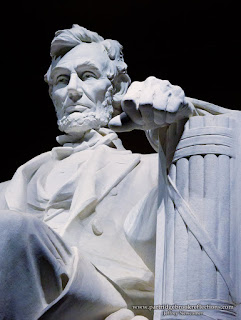 oln Memorial, which is an entirely different place after dark. During the day it is invariably crowded with tourist sitting on the steps enjoying the view along the reflecting pool to the Washington Memorial. Although still posing a challenge for photography, at night there are fewer people and the general tone is that of quiet reverence. I chose to focus on the details of Lincoln's imposing statue. I have always been fascinated by his hands, one clinched in a tight resolute fist and the other open and compassionate. I am impressed that his expression, seen from each side seems to reflect these two aspects of his greatness. The night-time lighting accentuates the dichotom 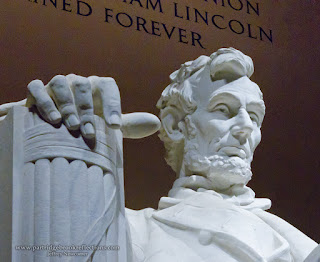 y with stronger direct illumination on his left (fist) side while more indirect lighting fills and softens his expression on the right. As I was focusing on Lincoln's right side I was surprised to find that I could also isolate a fitting epitaph above his head. For those with an intensely irrational, conspiratorial nature you may also notice that, in sign language, Lincoln's left hand is signing an "A" and his right shows the beginings of an "L".  You may take from that whatever you wish. I suspect space aliens !  The view from the steps of the Lincoln to the Washington Memorial tower is classic, but on this night, with a limited telephoto on my Canon G11 and the reflecting pool drained for cleaning, the conditions were not great.
As inspiring as the light is on the Lincoln Memorial, in the case of the Korean War Memorial it is positively spooky. The soldiers are arranged as if on patrol. The lights are very dim just barely illuminating the figures from below. Not wanting to risk my DSLR on these lonely, dark trails, I only had my Canon G11 and no tripod. This image was done at an ISO of 3200 and f4, just barely managing to hold at 0.4 seconds. The G11 is really pushing its low light capability at 3200 and the grain was prominent, but I think the image is still haunting, especially when the color noise is eliminated by the B&W conversion. Photography of all the memorials would benefit from the use of a tripod and a camera with strong low light sensitivity such as the newer Canon & Nikon full frame DSLRs. This would be more comfortable with the security of a big group and an excellent opportunity for a photo walk event. The National Park Services also runs night tours through the memorials. 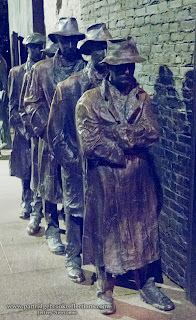 The Roosevelt Memorial is actually a seven and a half acre collection of statues, fountains and inscriptions stretching along a walkway. It effectively depicts the many challenges of the Roosevelt presidency from the Great Depression through the Second World War. Again the dim light required high ISOs but on occasions I was able to stabilize the camera on a bench or a rock. Using a cable release on my G11, I could use longer exposures lower ISOs and achieve better depth of field such as when capturing one of the fountains or when including Roosevelt's famous dog Fala with his master's statue.
Check out Roosevelt's defence of his little Scotty against Republican attacks.
Actually the rest of Roosevelt's speech to the Teamsters has a lot to say about our current political atmosphere. 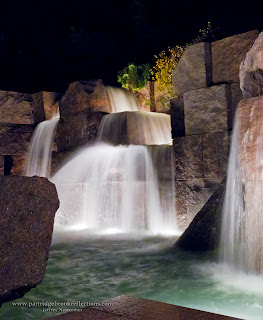 ﻿
﻿ The Jefferson Memorial was the next stop along the path, but, at the time of our visit access was partially blocked by construction, and unfortunately from here we had to head home. Exploration and photography of the entire loop would require a full evening, but it is a special experience, well worth the commitment. Give the night a try the next time you are in Washington.
Posted by Jeff Newcomer at 11:55 AM