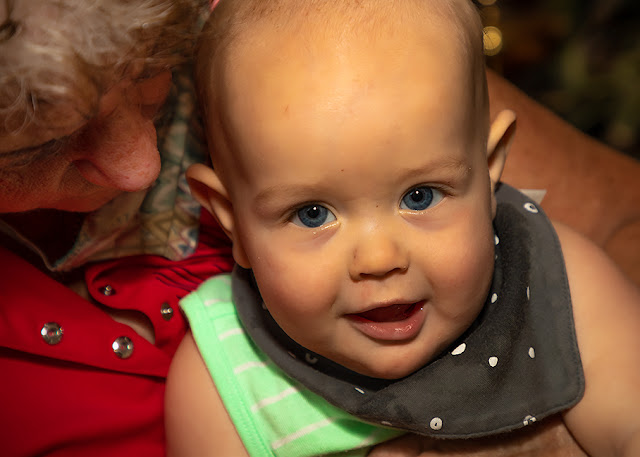 This is intended to be the first in a series of articles about flash photography, but, first things first.

I have the cutest, most good-natured 8-month-old grandson.  This statement may seem a bit over-zealous, but I am only reporting an inarguable fact, which is unrelated to how long we have been waiting for our first grandchild.  Owen is always happy, he never cries, and only poops sweet-smelling sunshine.

Ok, I may be getting carried away, but he is a great little Kid.  Since he was born, Sue and I have been excited to spend as much time as possible with Owen, but over the last LONG months we have been frustrated by our pandemic-induced isolation.  We have been forced to make do with frequent Facetime visits and Zoom family meetings.  We are grateful for the new technology, but it cannot replace the warmth of real physical contact.  All we wanted to do was blow kisses into his neck, inducing the inevitable chortling giggles.

Happily, after 2 weeks of strict isolation in their home outside of Boston, the family came to join us for an extended stay in New Hampshire. 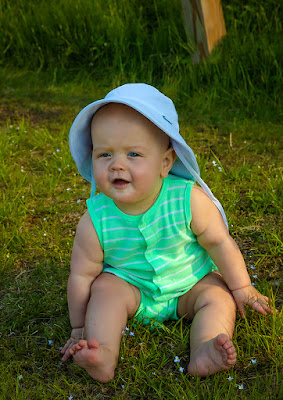 For nearly 3 weeks, we gladly cared for the little guy while Abigail and Grayson caught up on their work, setting up their remote offices on our dining room table.  As you might expect, I have been shooting tons of pictures of our delightful grandson.  I would love to fill this article with the undisputable photographic proof of Owen’s perfection, but his parents are reluctant to splash his face across the internet.  I understand their concern.  It would be cruel to spread dissatisfaction among all the other new parents of the world.


Because of the scarcity of willing models during the pandemic, I have been forced to use more compliant subjects.  Meet "Rickey the Head".  Rickey was originally designed to demonstrate various CPAP masks for patients with Obstructive Sleep Apnea, but with a coat of mat paint to blunt his plastic sheen, he is a reasonable subject for my flash experiments. Owen would have been MUCH better!

Flash (Some Basics)
I don’t think I can get more obnoxious, so I guess I better move on.  One of the side benefits of spending so much time photographing Owen is that I have become more comfortable with the use of my flash.

Given my concentration on landscape photography, I have seldom needed to use artificial lighting.  For portraits, I have depended on natural illumination, even when that meant that I was forced to either use high ISO or suffer from soft blurry images.  I have never been thrilled with the results from my flash photography.  It is not because of a lack of gear.  I have always felt that I possess more speed lighting equipment than the knowledge to use it effectively.

Over the years, I have regretted this deficiency.  I have felt uncomfortable that my Introduction to Digital Photography Course contained no discussion of the use of flash.  My next offering of the course is scheduled for next autumn and will be on-line.  I had already planned to expand the course to five sessions and include a preliminary discussion of flash photography.  I have always found that the best way to learn something is to be forced to teach it, but Owen’s 3-week residency provided an even better opportunity to expand my understanding of flash and prepare for my class discussion.

I will venture into a discussion of the types and usage of flash, but, this week, I will touch on a somewhat disconnected collection of information will include:


More details will be coming, although much of my time is still filled with Owen duty - both the activity and the brown residue. 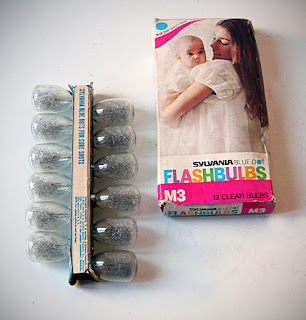 Sadly, I am old enough to remember when “flash” meant using flash bulbs for a quick crude blast of light. Over recent decades, single-use bulbs have been replaced by electronic strobes.

Electronic flashes produce short blasts of light created when a charged capacitor releases high voltage through a Xenon gas filled tube. Electronic flashes produce intense light over a short duration usually measured in thousands of a second. The amount of light delivered by the flash is governed by the duration of the burst of light and not by its brightness.  The short flashes produce less light. They demand less power from the batteries and require shorter recycling times. The shorter bursts also work better at freezing action.  When flash duration is at its maximal duration, some blurring may be seen in very rapid motion, but, for most speedlights, and depending on how it is measured, the flash duration ranges from about 1/400th second at max power to 1/20,000 at lowest output.

By comparison, Apple iPhones and most other smart phones use a short blast of LED light for their flash.  The light is less intense and therefore must be of longer duration and less able to freeze action.

Synchronization
Cameras generally have a maximum shutter speed for synchronization with the flash burst.  The great majority of DSLRs use a focal plane shutter.  In these, a first leaf moves across to expose the sensor and then the second follows to end the exposure.
At slow shutter speeds, usually less than or equal to 1/200 - 1/250 the shutter is fully open for a short period of time before the second leaf closes, and a properly timed flash can expose the entire sensor evenly.  At faster shutter speeds, the second leaf must begin its trip across the sensor before the first leaf is fully open.
The result of this moving slit is that there is no moment when the flash can expose the entire sensor.  My Canon 5D Mark IV has a maximum Synch speed of 1/200.  Above this I will see a dark curtain across a portion of the image where the flash failed to expose the sensor.

Happily, when the flash is engaged, my camera routinely does not allow shutter speeds faster than the max synch.  My 580EX II, and many other flashes, have a setting for “High Speed Synch” which allows faster shutter speeds by using a series of fast bursts to prolong the flash duration.

Flash Exposure
The important thing to remember is that the electronic flash is generally much faster than the synchronization speeds, and therefore, the exposure is independent of the shutter speed and is governed by:

The shutter speed only affects the  amount of ambient light seen in the image. So:

Flash Quality
All electronic flashes work in a similar way to illuminate a subject, but the quality of the light can vary greatly.  The quality of light depends on multiple factors including:

This is only the briefest introduction of a few important topics. There is much to talk about, the complexity can be daunting.  It is more than I can hope to cover in a few short blogs.   There are many articles and books which cover electronic flash in much greater detail.  A couple which I have found particularly helpful include:

Speedliter'sHandbook: Learning to Craft Light with Canon Speedlites (2nd Edition)  by Syl Arena
A great choice for those shooting with Canon equipment. I have the first edition, which although missing information about Canon’s latest top-level flash (e.g. the 600EX-RT), still Covers my 580EX II and does a wonderful job making flash comprehensible.  The 2nd Edition is quite pricey, but I may go for the new book if I get the 600EX.  Of course, by then there will probably be a 700EX.

The FlashBook: How to fall hopelessly in love with your flash, and finally start taking the type of images you bought it for in the first place by Scott Kelby
A short book which clearly sets out Scott’s simple approach to flash in his folksy style. It is not as encyclopedic as Syl Arena’s guide, burt unlike Syl’s, it is not directed toward a specific system.  Also it is a whole lot cheaper.  Although Scott’s basic approach to manual control of flash is mercifully straight forward, he suggests a long list of additional, wonderful, but expensive equipment. That cheap book has already cost me a lot more money!

Read the Damn Manual:
Your camera and flash manuals are full of great information which is specific to your gear.  They are free and, unless, like me, you can’t find the manual for you’re 580XE II,  you already have them,   Never fear, copies of all the manuals are available on-line.  The manuals are a great start, but they necessarily tend to be focused on the specific gear.  Books such as the ones above excel in discussing how flash can be modified and crafted to fulfill your artistic vision.

You have your camera and flash, now you need to get out and shoot.  Read the manual, try different settings, and learn from your mistakes with the instant feedback which digital photography provides.

Modern flashes are wonders of smart technology, but I recommend starting with manual.  As you become more comfortable with how electronic flash works, you will be able to identify the situations in which manual or smart setting, such as TTL, are best used and be able to tell why things go wrong.

My grandson Owen is back for another stay, prolonged I hope, and I anticipate getting more experience in the use of artificial light. The learning never stops.

Posted by Jeff Newcomer at 3:08 PM