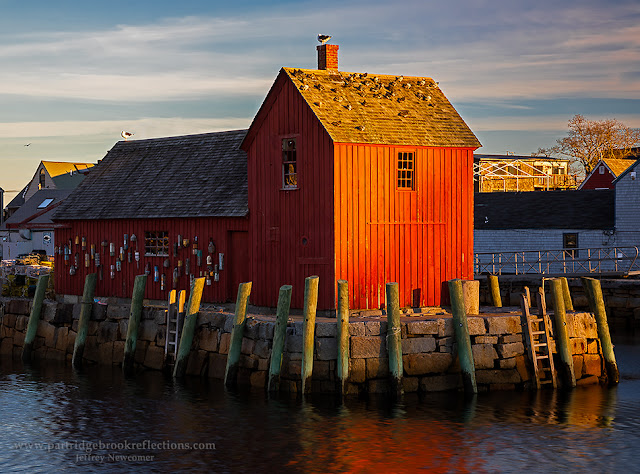 beauty of our unique corner of the country.  Since being establish by Jeff Folger, Butch Lombardi and Liz Mackney the Guild has grown to include 12 talented photographers from throughout New England.  It has been my honor to be member since 2012.  As stated in its initial blog article, Jeff Folger described the Guild as, “a place where some of the best photographers I've met will have a small gallery representing their work” to bring “all the incredibly beautiful areas of  scenic New England in one location”.


The Guild started as a gallery to show amazing images of New England, but over the years its focus has broadened.  Primarily through our regular blog articles, we have expanded our role to include a celebration of many of the region’s most beautiful locations, and as a source for information about photographic techniques and vision.


Recently we gathered in Rockport Massachusetts for a long overdue assessment of the on-going goals of our group.  We hadn’t met  in several years, and it was exciting that eleven of our current 12 members were in attendance.  It was a long meeting, including catching up with new and old members (I am one of the OLD members), chatting and comparing our various activities and of course planning how to keep the Guild relevant in the rapidly evolving world of digital photography.

We decided on a long list of tasks and goals, which might be worthy of a future article.  I was especially excited by plans to highlight the list of classes and workshops that many of our members organize throughout the year.  We came away with a fresh sense of connection and purpose, and a commitment to stay closer in touch with each other and our community.

In all, it was a productive and enjoyable meeting, but the other attraction of the weekend was the chance to revisit the Gloucester and classic New England fishing village of Rockport.

Back to Rocky Neck

I grew up spending my summers on our family's little boat on Rocky Neck in Gloucester.  I explored every corner of the harbor in my own eight foot dinghy with its ferocious 3 HP motor, and we spent weeks cruising the coast from Block Island to Acadia.  I wasn't surprised to find that Rocky Neck showed signs of development, but, for me, it still held the charm of many years ago. 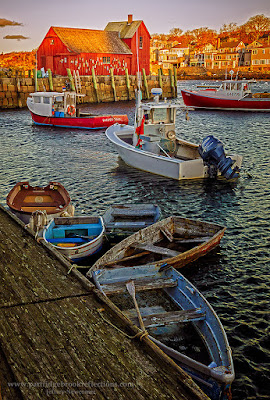 Rockport harbor is tucked away in a far corner of Cape Ann on the northern Massachusetts coast.  Despite its relative isolation, Rockport still attracts tourists to its artist studios and unique shops especially along famous Bearskin Neck.   Photographers are drawn to its well protected harbor, which is almost entirely populated with working lobster boats.  Unlike so many harbors on the New England coast, Rockport has not become overrun by pleasure craft.  The waterfront provides many opportunities to capture scenes of lobster boats, weathered shacks, lobster pots. colorful buoys and coils of rope. 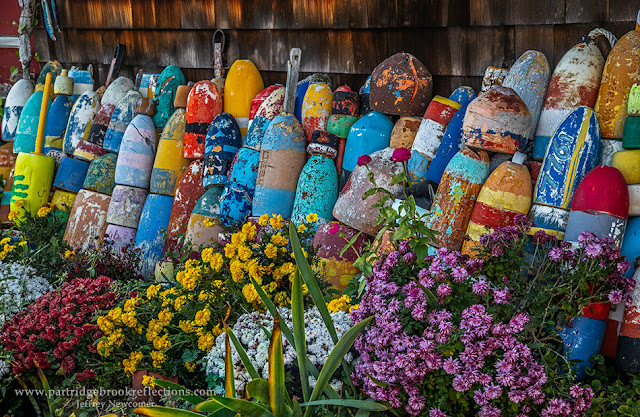 Of course, Rockport is most famous for the iconic red lobster shack “Motif Number One”.  Every photographer who has ever lived must get the classic shot of the motif.  It would be trite if the damn place wasn’t so ironically iconic!  The goal is to find a few fresh angles on the shack, but a “fresh angle” means that it has been captured by perhaps 1,000 previous photographers.

Of course, I bagged my Motif from several perspectives.  I included lobster boats, pots and skiffs.  I shot evening and dawn light and mixed in a little tone mapping.  That should last me for a few years.

Dinner and a Thacher Island Dawn
Our Guild meeting was scheduled for 9:30 Sunday morning, so Susan and I headed down on Saturday afternoon and stayed at the friendly Tuck Inn.  Saturday night we joined Guild Members Liz Mackney and Jonathan Steele (with his partner Jules) for dinner at a local fish restaurant.  The food was great and Jonathan, Liz and I got to consult the Photographer’s Ephemeris for the best place to catch the sunrise over Thacher Island.  Susan and Jules seemed happy to entertained themselves. 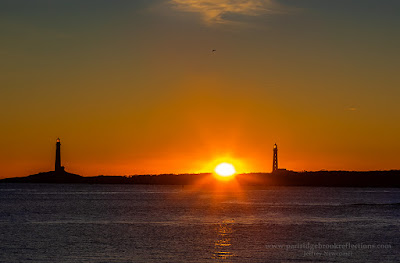 Sunday morning, I met Jonathan before dawn on the rocks opposite Thacher Island, with its twin lighthouses.  Right on cue, the sun rose between the two lights.  It was a beautiful calm and clear morning, sadly entirely too clear!  The hope is always to have enough clouds in the sky to light up with the gold of the rising sun, but this morning we had to contend with the “terrible clears”.


Dealing with the Terrible Clears 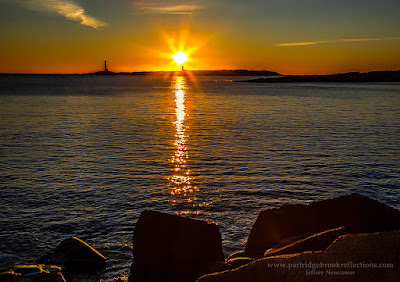 I tried many of the approaches to a dull clear sky.  Before the sunrise I took advantage of the “blue hour” with its additional shades of red and yellow.  I caught the first slight crescent of the sun as it rose above the island.  For most of my sun shots, I accentuated the star burst appearance by stopping down on the aperture to f16-f22.  Unfortunately, the small apertures also increased the prominence of flare, which required correction in post-processing. 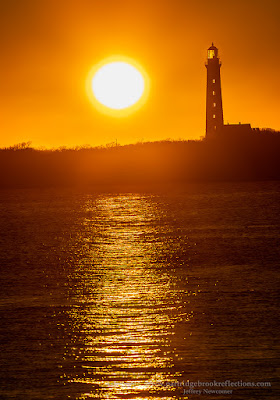 Another approach to an uninteresting sky is to eliminate most of it.  In one shot I zoomed in on the South Lighthouse, reducing the sky and showing the sunlight shining through the light and the tower windows.  In another image, I pulled back to show the foreground rocks and the light scintillating across the water.

I always enjoy finding excuses to travel to our New England seacoast.  On this occasion I got the opportunity to capture images around one of the coasts most iconic little harbors while also renewing connects with some of our regions best landscape photographers.  What could be better?

Posted by Jeff Newcomer at 4:40 PM