Photography Through the Fence – Melting the Wires


This should be a quick tip.  I’m getting ready for my Introduction to Digital Photography course which starts on April 6th and my Spring Waterfall Weekend beginning May 5th.  It is a busy time.


During our southern trip this winter we saw incredible wildlife, especially in the Everglades, and in Audubon preserves around Naples Florida.  It was exciting to see so many exotic animals in the wild, and dramatically close and, of course, within range of my camera.  On one occasion, however, we saw a few animals in cages and that reminded me of techniques I’ve learned to photograph through wires.

While in Naples, we visited the von Arx Wildlife Hospital, which is a wonderful institution dedicated to the care and rehabilitation for injured wildlife.  The hospital sees more than 3500 animals per year, including bobcats, deer, pelicans, herons, gophers tortoises and many other species of native animals.  The goal is always to get their patients ready to be reintroduced into the natural environment, but that is not always possible. Some of the animals have injuries which prevent them from being able to survive in the wild and are kept as “Ambassadors” for presentations at local schools.  Included in this group are a Bald Eagle and a Red Shouldered Hawk.


I was able to approach these magnificent birds in their cages, but there was a problem.  How to photograph through the wire?  It is a challenge that I have experienced before and there are a few simple techniques that can be quite helpful.

Note: The Hawk was more challenging since it was standing close to the fence, making it harder to get the wire out of the zone of focus - still, not bad.

The most important technique is to use shallow depth of field to your advantage.  Approach the wire as closely as possible and try to center the shot through whatever gap is available.  Then make the DOF as narrow as possible, combining a wide-open aperture with a long focal length.  It is remarkable that, when the focus point of the subject is sufficiently distant from the wire, the obstruction will melt away.  This may take some experimentation.  It helps that, in order to have the brightest the view, DSLR viewfinders are always set to the maximum aperture. 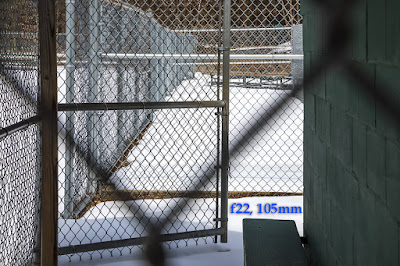 Looking at the scene, you will be seeing the effect of the shallowest depth of field. Of course, shallow DOF is helped by having a fast lens and a large sensor.  Given their nearly infinite DOF,  this is not a technique that will work for most smart phones. 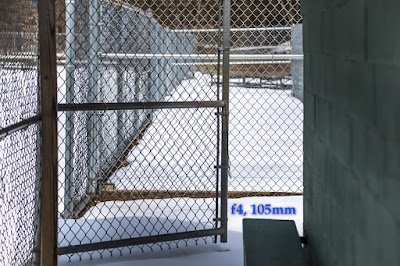 I was able to find a few examples of these techniques from the past, including a tour of the National Zoo in Washington DC.  For other examples, I went to the ball fields at Wheelock Park in Keene New Hampshire, but the subjects were not especially exciting.  I needed to find interesting stuff with wire in front.

I also wanted to demonstrate the effects by comparing more pictures captured with large and small apertures.  I finally decided to insert my own fence.  I bought a 2’x4’ piece of wire fencing and then placed in front of various scenes, including the Chesterfield Town Hall and the Pond Brook Falls in West Chesterfield, New Hampshire.

A few other factors can affect the ability to melt the wires.  Obviously wider wires can be a problem as can anything else that makes them more prominent such as bright colors.

A common difficulty comes when the wires reflect bright light. Overcast skies or shadows can help, and sometimes it is possible to place the fence in shade.  I used my jacket to block the light that was gleaming from the fencing at Wheelock Park.


All of these techniques can help deal with fencing, but images captured through obstructions will, at best, still have a softer quality.  Editing software can add clarity, but the best solution is always to try to find a way to get a clear look at the subject.

Now enjoy my first try at an animated gif on the blog!