There are several factors which control how falling snow appears.   I discussed some of these in a previous article. They include the intensity of the storm, the size of the flakes, the wind velocity, and the shutter speed, but one factor that I didn’t discuss is worth considering. The distance from the subject and the focal length of the lens required to pull that subject close can have a striking effect on the apparent intensity of the snow fall. It is all about the volume of falling snow that veils the subject.


I have always observed that the intensity of snowfall can be enhanced by moving away from a subject, and then pulling it close with a long lens.  This week I was hoping for a storm that would allow me to clearly demonstrate this effect.


My opportunity came last Wednesday when a brief squall came through.  I ran up to Chesterfield Center where I had the room to shoot a similarly composed picture of the iconic Town Hall, first from a distance of 45 feet with a 32mm lens, and then from across the school playing fields out to 480 feet with a 180mm focal length.  The results were striking. 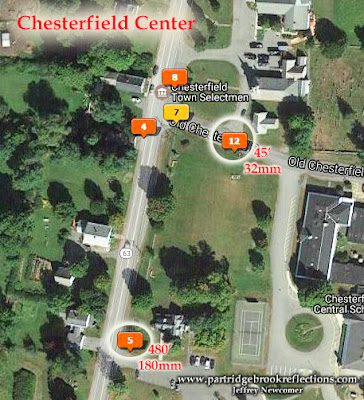 The foreshortening created by the long lens compressed onto the building all the extra snow which was present in the intervening distance.  Although they were taken just a few minutes apart, it looked like two entirely different storms.  The point was dramatically clear. If you want to intensify the appearance of a snow storm, back away from the subject, and then pull it back in with a long lens.  It’s not cheating.  It’s just physics. 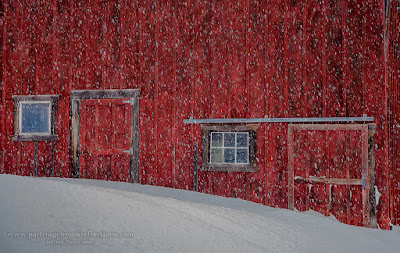 By the time the squall had moved on, I had made my point and also had enjoyed the full effect of the rest of those soft, lazy flakes.

Posted by Jeff Newcomer at 1:22 PM