I have a great group of students gathered around my dining room table for this winter’s Adobe Lightroom Class.  They are smart, energetic and ask really good questions – LOTS of questions.  As a result, after two classes on the Library Module, I still have more to cover.  I’ll finish up next week, and then I hope to get a good start on the really fun stuff, Development.  It looks like my plan for a five-week course may expand to six.  I don’t care.  Its winter, and what else do I have to do?  Besides I love talking about this stuff.

Since I’m pressed for time and I’m working on it anyway, This seems like a good opportunity to review a component of the development module which seems to one of the most confusing, sharpening.

Why do digital Images Need Sharpening?

When examined closely, digital images always have some softness, which is most noticeable along sharp edges.  This is seen as I zoom in to 4:1 on a collection of reeds, contrasting with the snow across from Thompson Brook in Alstead New Hampshire.  The individual pixels of a sensor each record an average of the amount of light striking them.  If a razor-sharp edge between bright and dark, such as created by these branches, crosses the middle of a single pixel it will record the average of that dark and bright, that means it will show a middle gray.


Sensors can never record a perfectly sharp edge but will have a scatter of gray tones along the edge, and that softens the sharpness.  Higher resolution sensors will have less of this effect, but it will always occur on images recorded with pixels.  Sharpening creates a greater contrast between dark and light but doesn’t eliminate the effect. 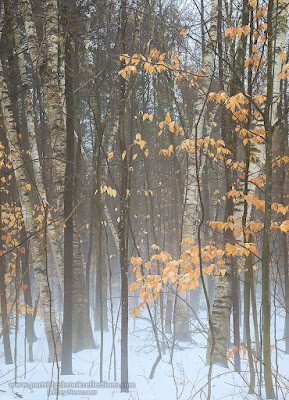 Softness always happens, but editing programs such as Photoshop and Lightroom have sophisticated tools to help reduce the appearance of softness.  It is worth stressing that Sharpening Tools make images LOOK sharper even though they can’t actually sharpen the edges.


Sharpening in programs such as Lightroom work by increasing the contrast between the light and dark sides of an edge.  It does this by lightening along the bright side of the edge and darkening along the dark side. When done subtlety, the results can appear as a sharpening of the edge, but when taken to excess halos can become apparent and excessive noise can be created.  The sharpening controls are designed to find the best balance of this effect for each image, but, as you will see below,  it is often helpful to understand theses controls by experimenting with their extremes.

Before You Sharpen
Before you dive into the Sharpening Panel a few points are worth mentioning.

Sharp Focus
First, no amount of sharpening can fully correct an image which is out of focus.  Start with a shapely focused image and if only parts of the image are in focus, make sure that you zoom in on that part of the picture before sharpening.

1:1
Generally you should do the sharpening at 1:1 magnification, but I will be zooming in closer to better show what is happening during the process.

The sharpening in the Lightroom Develop Module is called “Input Sharpening”.   It is your first pass at sharpening but shouldn’t be the last.  In Lightroom you are sharpening the image for the screen, but you should not over do it.  Images generally should receive a final “Output” sharpening after they have been edited and resized for a particular purpose.  An option
is available in Lightroom's Export Panel to sharpen the exported images for the intended purpose. Choices include, sharpening for the screen (web), and for printing to either Mat or Glossy paper.  These generic adjustments often work well, but I generally prefer to make my final output sharpening from within Photoshop.

The important thing to remember is that Lightroom's input sharpening is not your final opportunity to sharpen the image, and therefore it is best to make the adjustment on the conservative side.  That being said, I like the way Lightroom performs sharpening, and I find that I have to do a lot less in Photoshop if my images have been pre-processed in Lightroom.

Noise Reduction
Particularly on especially noisy images, I find it helpful to do some preliminary noise reduction before I sharpen.  Noise reduction is performed in the panel just below the Sharpening tools and is worthy of a separate discussion, which I will save for next week, but when done first it can avoid the sharpening of noise artifact.

The “Science” of Sharpening
Finally sharpening is not an exact science.  Everyone must judge for themselves the optimal balance of apparent sharpness and artifact.  Despite what you may read in many on-line articles, there is no magic formula for the best sharpness in all situations.  The Sharpening Tool Panel can help you better see the effects but the final decision is yours.


Ok, you have zoomed into a focused area of your image showing some edges that should be sharp.  Now what?  There are the four basic adjustment sliders which all work together to get the best results, Amount, Radius, Detail and Masking.  Since RAW images always benefit from sharpening, Lightroom sets initial default values to get you started.

Amount
Simply stated, the Amount Slider controls the amount of sharpening.  What that really means is that it controls the extent to which an edge is accentuated by bands of darkening on the dark side and lightening on the light side. The higher the number, the greater the effect.  If you move too far you will be able to appreciate halos of light and dark on either side of the edge and you will also see increasing noise.  Raw images open with the Amount set at a default of 25.  I typically vary the value from 50-100 with images containing a lot of fine detail often tolerating higher levels.  The extreme settings, shown here for illustration, include both the maximal sharpening and the radius at its greatest extent.


Sharpening is strictly a luminance effect and not related to color   Therefore the effect can be better seen by holding down to “Alt” key (“Opt” on a MAC) to remove the distracting color.  The same key can be used on the Radius and Detail sliders to show their effects more clearly.  I have never found that this modifier makes a significant difference in my ability to follow the effects of these adjustments, but you should try it for yourself.   As we will see the Alt/Opt key has a somewhat different effect on the Masking slider.

Radius
Radius controls the width of the bands of “sharpening effect”.  The default value of 1 means that the effect covers one pixel around the edge.  Higher values will widen the sharpening effect but also increase the appearance of halos.  I tend to leave this at its default of one and seldom go above 1.5.  The best Radius setting will depend on the size of the image.  A value of 1-2 works well on large images, such as the 4480 x 6720 pixels from my 5D Mark IV,  but this is obviously excessive for sharpening done on my web images, which have a long dimension of 950 pixels.  For the web, I generally start at a radius of 0.5.

Detail
The Detail Slider controls the extent to which the finer detail in the image is sharpened.  At 0 only the most prominent edges will receive sharpening and, as the value increases toward the maximum of 100, more of the fine detail of the image will be affected and also image noise will be accentuated.


Masking
The Masking slider controls how much of the image receives the sharpening effect.  You want to limit sharpening to areas of important detail and mask it from regions of naturally soft continuous tone such as sky or water.  In portraits, the areas around the eyes and mouth may benefit from sharpening but not the skin of the cheeks and forehead.  Holding down the “Alt” key (“Opt” for Macs - must I keep saying that?!) while moving the Masking slider to the right, areas of black will increasingly appear.  The black areas are masked from the sharpening.  The slider can be moved until the sharpening is restricted to those areas of detail where the effect will be beneficial.  Masking of sharpening can be done more accurately with localized brushes in Lightroom or Photoshop, but the Masking slider does a surprisingly good job.

When zoomed in closely you may notice that your masking does not tightly align with the edges and, if there is excessive noise, this may show as a noisy border along sharpened edges.  This is seen most clearly when closely zoomed and can be reduced by expanding the masking or reducing noise by using the Detail or sharpening sliders.

As I said, there is no correct formula for sharpening and the best approach is to go back and forth with the sliders to find a good balance.  Remember that this is Lightroom therefore and any changes you make can be reversed.  Nothing you do will explode your image.  That's being said, here is my rough approach.

I start with the Amount Slider and vary it to find a spot that begins to result in unacceptable artifacts.  Then I pull back a bit.  I generally keep the radius at one.  I then reduce the Detail slider  from its default setting to zero, which has the effect of softening the image.  I then move the Detail slider up until I start seeing fine or “high frequency” noise appear and pull back slightly when the noise reaches that nebulous “unacceptable” point.

At this point, I will use the masking tool to make final adjustments in the amount of the image which is affected by the sharpening.


My final step is to turn the Sharpening Effect on and off using the switch at the top left of the Detail Panel.  This reassures me that I have actually created the appearance of increased sharpening.

Sharpening in Lightroom should not be intimidating.  Just remember to use a light touch, knowing that it will not be the last time that you will apply this effect.  Then trust your eye.  Have fun.

Posted by Jeff Newcomer at 5:45 PM