Winter on the Top of New England 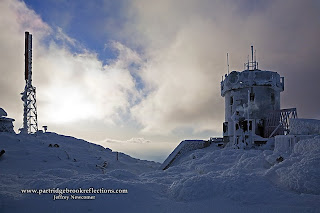 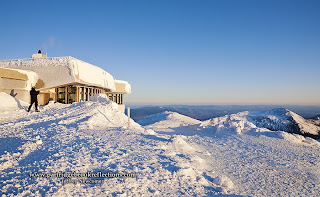 New Hampshire’s Mt Washington at 6,288 feet is the tallest peak in the Northeast and famously the home of the "World's Worst Weather". This claim originates from the fact that the Mt Washington Observatory recorded the worlds highest surface wind speed in April 1934, at 231 mph. The mountain is also at the intersection of several important storm tracks from across the country. The combination of wind, cold and precipitation make the mountain one of the most inhospitable, continuously occupied places on earth.

The Mount Washington Observatory is a privately funded, non-profit institution dedicated to education and scientific investigation of weather and climate. The observatory’s most notable achievement has been the maintenance of its summit weather station, which has reported conditions on the mountaintop 24 hours a day, 365 days a year, for decades. 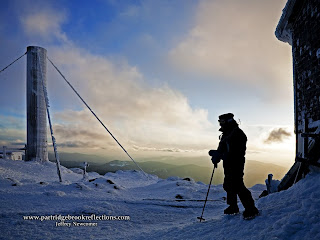 The observatory is generally closed to the public during the winter months, but there is the opportunity to visit the summit as part of one of their scheduled educational trips. These overnight “Edutrips” allow the experience of dealing with the incredibly harsh weather while learning about a variety of related topics such as winter mountaineering, & meteorology. On March 12-13 I had the opportunity to take part in photography based trip and had a truly unique experience. Ned Therrien, a nature photographer who has a wealth of experience in the mountains, led the workshop. Ned has guided groups to the top of Mt. Washington for over 30 years.

The trip started in the morning with a more than 7 mile ride to the top of the mountain on a snow tractor. The Bombardier tractor not only transports people and supplies but also is involved in the continuous clearing and maintenance of the narrow winding road to the summit. It was a bumpy ride with a potential tumble into oblivion always just a few feet away. In the tractor we were required be dressed for the possibility that , at any time, we might need to pop out and walk back down the mountain in a howling gale. The cabin comfortably accommodated all 8 of us, but I was luck to have the opportunity to ride in the cab with our driver Gus for the first part of the trip. 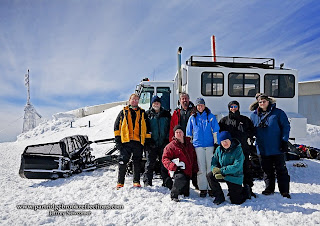 On this trip we were blessed with unusually beautiful weather, but it didn’t seem that way at first. We arrived with the summit in a cloud, more than 20 degrees below zero and winds in the mid 90’s – gusting to over 100! Of course this is the stuff we came for but it did make photography about as difficult as can be imagined. Surviving in wind chills of more than 70 degrees below zero is a challenge in itself. The Observatory insists on a very specific list of clothing – many layers and NO COTTON, which looses its insulating effect when damp. No skin can be exposed or risk almost instantaneous frostbite. Surprisingly, with proper clothing, it was possible to move outside without feeling cold, but the real challenge was to stay upright in the wind. Movement in 90 mph winds required short steps from a crouched position, and seriously spiked crampons were an absolute necessity to grip the rock hard ice sheet under foot. 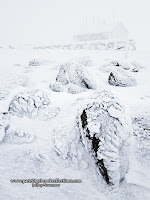 The challenges of photography in these conditions were daunting. First, simply holding a camera was a struggle. Tripods are at best useless and at worst dangerous when they become wind blown missiles. A monopod would have been a real help, but all I could do was hold the camera close to my body and wait for a relative lull in the gale. High ISOs (400-800) were required to allow a shutter speeds fast enough to limit the shake. Framing and focusing was also a struggle. Even with good goggles my glasses fogged up instantly. I eventually had to go without, but still the goggles frosted over in 10-15 minutes. I had to depend completely on auto-focus, at least until the frost obscured my view of the focusing dot. The scene could only be roughly framed since the goggles allowed me to see only a portion of the view finder field at any one time. This is where a live LCD would have been a real advantage. As expected battery life was also an issue in the drastically sub-zero weather. I had two spares kept in an inside pocket for warmth, but I ran through all three batteries in about 45 minutes of shooting. Of course my poor Canon 5d was frozen solid by the time I returned to the welcome warmth of the observatory. I was excited to see what I was able to capture, especially since I couldn’t see a thing while I was outside, but I was frustrated by the necessity of bagging my camera for several hours to avoid condensation as it warmed to normal temperature. 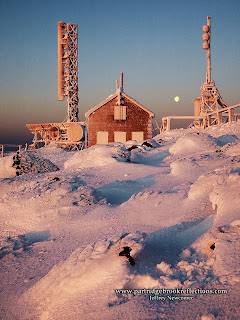 Enough whining! This was an incredible experience that I will never forget. Bundled up as if in a space suit, walking on a landscape that appeared more like the moon than earth, it was truly like being on another planet. Of course, on the moon, the wind doesn’t blow quite as ferociously! Although we had a tough start the weather progressively improved during our time on the summit. By evening we were treated to a dramatic sunset breaking through the clouds and the next morning dawned crystal clear. During the winter the summit of Mt. Washington enjoys only a few clear days each month– getting a sunset and a sunrise on one overnight trip is almost unheard of. When it was time to leave the summit on the afternoon of the second day the wind had dropped to 40-50 mph with the temperature soaring to a balmy 5 degrees below zero! It felt like Bermuda weather! 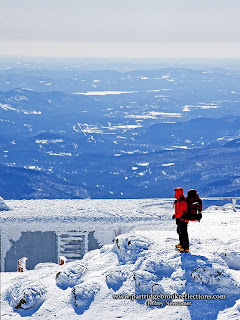 I have included a few of the pictures from the trip here but I’m still adding images to my web site: http://www.partridgebrookreflections.com/ and to my Flickr account : http://www.flickr.com/photos/27036710@N05/. Check them out. Despite the weather, the images reflect a peace and clarity that it was hard to fully absorb at the time. To properly appreciate the experience you must view the photographs while imagining the sound of a freight train roaring past about an inch from your ears. The light on the summit had a remarkable brilliance and sparkle that made everything stand out in crisp relief. The sky was noticeably darker at that altitude, making regular unfiltered images appear as if they were shot through a polarizer.

I must talk about the friendliness and hospitality of the staff in the observatory. The weather observers stay on the summit for week-long shifts. Someone is always awake recording hourly observations regardless of the weather. 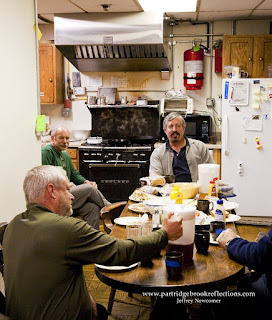 Despite their hectic schedules the staff was always very approachable and excited to talk about their experiences on “the rock”. You should ask Ryan to tell you about the night he was blown across the summit by 150 mph winds. The staff and visitors live and work in a small collection of rooms cocooned within the 3 feet of reinforced concrete of the observatory building. During the summer the observatory bustles with a steady stream of visitors but in the winter the place is surprisingly cozy and peaceful. The mattresses in the shared bunkroom were rock hard, but the food was great. Volunteers, who sign up for weeklong shifts, prepare meals on the summit. On our trip, a couple from Massachusetts, provided both great food and a feeling of family warmth.

Overall this was an incredible experience as much for the struggle with the elements as for the unique photographic opportunities. I would highly recommend the observatory’s Edutrips. I hope you will be as blessed as we were with spectacular weather. 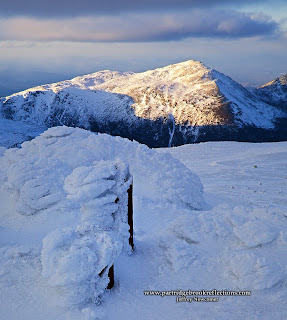