What is Super about a SUPER MOON?


Like everyone else, I was caught up in Super Moon fever last weekend.  The news was full of it.  The full moon straddling Sunday and Monday nights would be the biggest since January 1948 and not to be exceeded until 2034.  I’m not sure that I will be able to lift a camera in 2034, so I had to get out to capture the “spectacular show”.  Photographers were out, sometimes in large crowds, to shoot the moon as it rose above lighthouses, mountains and church steeples.  Facebook has been glutted with spectacular images of the event.  Crowds gathered and I was no exception.

As always, I used the Photographer’s Ephemeris to find the line upon which I would need to find a clear observation point to place the rising moon behind Mount Monadnock.  On the coast, it is easier to line up the moon with a clear view to various interesting foregrounds, such as lighthouses, but inland, I needed a spot far enough away and high enough to make the moon stand out large against the rapidly fading blue hour background.  My line went through Winchester, southwest of the mountain.  I needed to go high and, on a hunch, I found a spot on a ridge west of the Ashuelot River

that opened through the hills to a view of the mountain fifteen miles away.  It was sheer luck, helped by a little planning, that I found such a perfect spot so quickly.  Sunday evening was clear and I was able to convince fellow photographer Steve Hooper to join me on the ridge.  As we waited, the neighbors came out to offer us beers.  The pressure was on and, thankfully, the Ephemeris came through.  As predicted, the moon crested perfectly and on the

northern ridge of Monadnock.  Steve and I shot continuously as the compliant moon rose over the peak.  Good thing, because on Monday night the moon over the cemetery in Troy was obscured by clouds.  No matter, I have another Super Moon in the can!
Super moons are always a great excuse to bring people out to appreciate the beauty of the full moon, but, as everyone is breathless over the spectacle, it’s good time ask whether the super moon is really all that super?  After all our moon reliably orbits the earth every 28 days and every 28 days it returns to being fully illuminated by the sun. 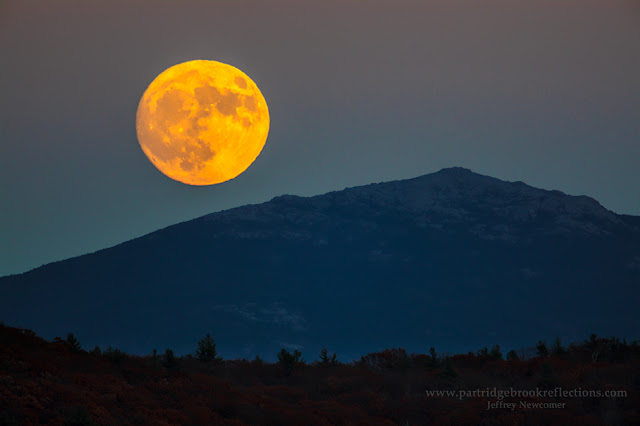 So, what is special about Super Moons.  The moon’s orbit around the earth is an ellipse, its proximity to us varies from about 222,000 miles at its closest, called at “perigee” and 252,000 mi at the farthest point on the ellipse, called at “apogee”.  The moon reaches a perigee point every month, but the “Super Moon” title has been arbitrarily give to full moons that happen to occur when the moon is at perigee and are seen to be about 14% bigger than when at apogee. 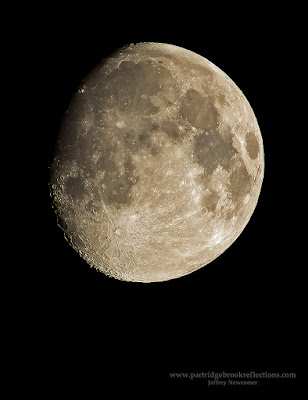 Regardless of the phase, the moon is always bigger at perigee, but no one gets excited by a “Super” quarter moon.  I love it when the moon is in full sunshine, but I also find special interest when it is partially illuminated.  Light shining tangentially on the moon’s surface highlights the irregular landscape of mountains and craters.  For all its brilliance, the light on the full moon is flat and lacks dimension. 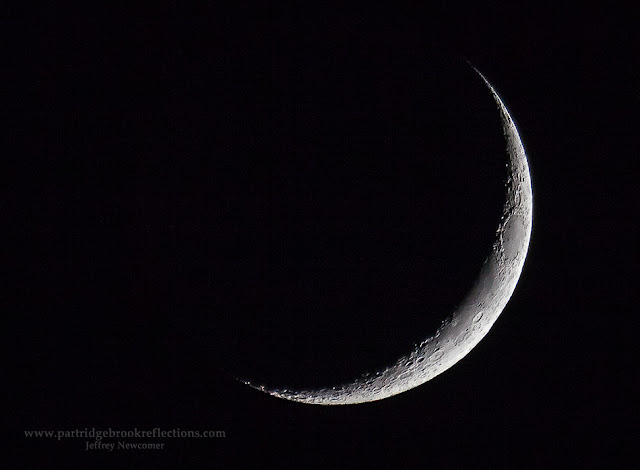 On rare occasions the full moon provides an additional bonus, when it is paired with a lunar eclipse. I was lucky to be visiting friends on the Connecticut coast for the last such event in September 2015.  I caught the super moon rising over the Old Saybrook Breakwater Light, and later recorded the progression of the lunar eclipse from my friend’s front yard.  Ok, that WAS super! 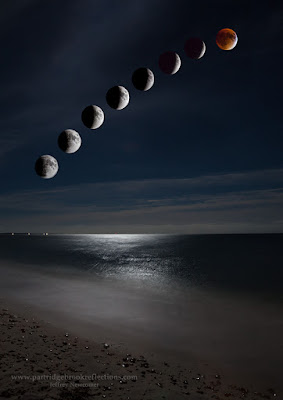 A Super Pizza
But, how much more impressive is the moon when it is 14% larger than when at its smallest.  I’m never quite sure that I can appreciate the difference and, for all the gasped admiration, I doubt that the average viewer would notice the difference unless the two moons were magically side-by-side, or if they were told that it was “Super”.   It is the result of an optical illusion that makes all full moons look impressively large when close to the horizon, but he diameter of a super moon is only about 7%  bigger than a “Mini” moon.  Astronomer Neil deGrasse Tyson has a nice way of placing this small difference in understandable gastronomical perspective:

It may be true that some observers, with unaided eyes, can appreciate the relative size of a full moon at perigee, but for photographers, the difference is of less importance.  We view the moon, not through our eyes, but through a lens and the smallest moon can be rendered super merely by a slight increase in focal length.  A super moon seen through a 100mm lens will appear to be the same size as a “mini” viewed at 107mm.

I have nothing against super moons, I was out on the hillside with everyone else, but please, can’t all those spectacular, but non-super, moons get a little love.  After all, you won’t have to fight the crowds to shoot any of those lonely non-perigee displays, and with careful planning they can be equally impressive

The attraction of any full moon is, of course, that it is full, but for me its most important attribute is that it always rises and sets during twilight.  Full moons always appear when there is still beautiful blue light in the sky to compliment the yellow orb and to cut the contrast.  Against the dark night sky the moon must be photographed either with detail against a featureless black background or appear as a blown out white disc. Regardless of the size of the full moon its true glory comes from the visibility of its surroundings.  Some of this may be captured using multi image HDR, but nothing matches the warm moonlight against the cool of twilight and that occurs with every full moon, not just the super one.

Know the Rules
So get out and worship the glorious full moon, but remember that you don’t need a super moon to come home with super shots.  The rules are always the same.


And finally remember, every full moon can be super.  Your next chance is the “Cold Moon” on December 13th.

Posted by Jeff Newcomer at 9:21 PM