I don't get to the shore as often as I would like.  Those of us who live around Keene New Hampshire are proud of announcing that we are located in the “precise geographic 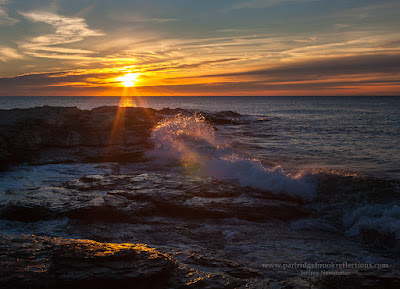 center of New England”, but that does mean that I must make a long trek to get to the ocean.  I grew up on the north shore of Boston and spent my summers on the water in Gloucester Massachusetts.  I love living in the Monadnock region but my distance from the shore is my only major regret, so, whenever I get the chance, I bring my camera to capture the restless water.  From my sadly limited experience, I can't claim to be an expert on ocean surf photography, but, since I seldom can wait for the perfect conditions, I have learned something about making the best of the conditions with which I am presented. 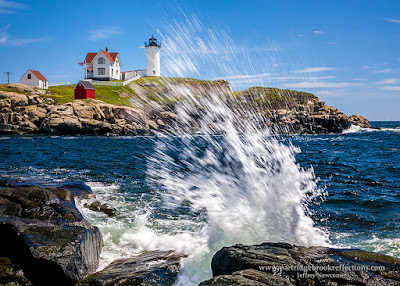 Last weekend Susan I traveled to visit old friends who are now living in York Maine.  We were excited to spend time with Wally and Michele and even more excited to see their new granddaughter Maya and her doting parents, Emile and Keri.  Of course I also had my eye on the weather and tides to see what I might capture by sneaking away to the shore.  York's premiere coastal attraction is the classic Nubble Lighthouse perched dramatically on its tiny island off Cape Neddick.  I've shot the lighthouse many times but I am always looking for new light and angles.  On this trip I had to work a little harder.


I initially planned to get up early on Sunday for sunrise at the light, but, as I went to bed, my iPad showed me that the morning was predicted to heavily overcast.  No chance for a glorious sunrise and besides the tide would be nearly dead low at dawn.  There seemed nothing to be gained from dragging myself out of bed at 4AM.  I only half reluctantly turned off my alarm and settled in for a nice long rest. My next option was to get up for a leisurely breakfast with friends and then see how things looked at around noon when the tide would be high and perhaps there would be a few breaks in the clouds.

Of course even on an overcast day Nubble Light is a popular tourist attraction and the dense noontime crowd was assembled on our arrival.  Fortunately, the tourist thin substantially down on the slippery rocks and I was able to find a number of unobstructed angle to the lighthouse.   The decent was a bit scary considering my crumby left hip, which is scheduled for replacement next month, but I made it down without damage to either my joints or, more importantly, to my gear. 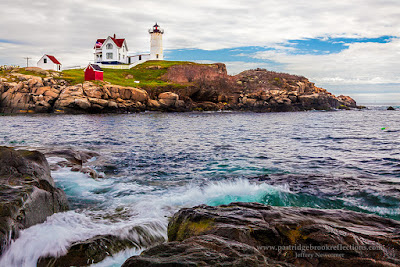 I hoped for energetic surf from the passing storm, but the waves were only moderate.  I scouted for locations with interesting foreground rocks and a good angle on the light, and then the trick was to get low on the rocks to minimize the apparent gap between the shore and the island.  I settled in and, as my butt became progressively cold and damp, I planned the shots I would need to capture the full drama of the crashing surf.

The challenge of surf photography comes as we try to capture the sense of relentless motion within the limitations of a still image.  Here are the problems, and some of my attempts at solutions.


The portrayal of surf varies widely primarily based on the length of the shutter.  Short exposures freeze the drops in mid-flight highlighting the hectic, random nature of the splash, but I love long exposures that render the water in a soft blur that portrays a sense of motion.

For these images the timing can be quit critical.  With longer exposures the detail in the water can be lost and with exposures of several seconds the churning ocean can be rendered as a misty flat pool.  It is all a matter of artistic taste, but, in most situations, I prefer shutters set to less than a second to preserve enough detail in the water to reflect the patterns in the flow.


It is often said that waves travel in groups of 7 building to a maximum amplitude and then falling off.  Anyone who spends any time observing waves against the shore knows that their sizes do vary in a more or less regular pattern, but the rule of seven is not a reliable guide. There is no way to be sure when a big wave is coming, but after viewing a few cycles it is possible to make reasonable predictions and then shoot off bursts of images when conditions seem right.  Anticipation is key since, if you wait to see the perfect "crash", it will be gone before you can hit the shutter.  It mean capturing a lot of useless images, but there will often be some gold among the slag.  Thank goodness for digital

photography and large memory cards. Years ago I was shooting the surf off of Pemaquid Light in Maine from a precarious rock which projected into the bay. Before I was nearly washed away I managed to capture more than seventy images, as I tried to anticipate the perfect wave.  At home I was thrilled to find two images from the 70 that I felt were worthy "keepers".  One is thirty-five is not a bad ratio.


I usually try to include interesting foreground rocks in my surf and lighthouse images and, even with the small apertures dictated by my long exposures, it is often impossible to capture the full depth of field in focus.  I routinely use focus stacking to get everything sharp but the foreground surf has a tendency to get in the way.

On a number of the photographs of Nubble Light, I first shot a series of images focused on various planes, restricting my shots to times when the surf was quiet.  I combined these in a “Focus Stack” using Photoshop's Auto Align and Auto Blend tools and used this blend as my baseline full focus image.  I then settled back, focused on the foreground rocks, and shot multiple images of the crashing surf trying to capture the perfect wave and its aftermath.   In post I was able to choose among my best surf shots to blend with my baseline depth of field image.

Cool huh?  Cheating?  Of course not it was what I saw - almost - there is still one more step to blend the entire experience into a single image.


When I watch a wave crashing against the rocks the full dramatic event usually takes a second or two from the initial explosion of surf through the secondary surge of froth blanketing the rocks.  It is much like fireworks whose initial explosion is followed by the flowering of colored streamers.  For both fireworks and crashing surf, my eye records the event as an unbroken continuum, but, given my desired shutter speed, a single still photograph of surf can only record a portion of the display.


Returning to the crash, I blended parts of three shots taken to record the progression of the wave's “performance”. 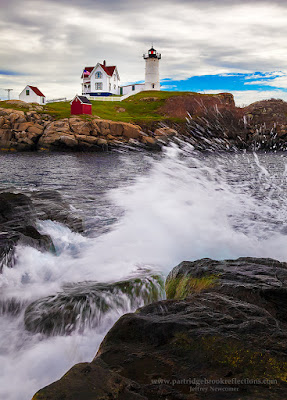 The first shot captured the splash at its peak but tended to wipe out the view of the rocks further in.  The second and third shots combined to show the surf working its way around the rocks revealing subtler patterns of dark and light.  Using the blend of the three shots, I was able to much more closely match, in a single digital image, what my miraculous "analog" eye perceived. 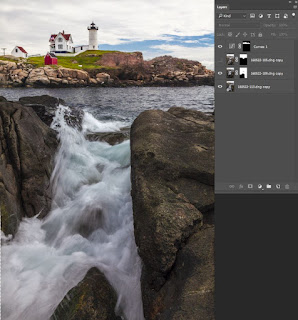 I finished by settling into a somewhat precarious position along the slippery edge of a slot that faced the lighthouse.  Again, a burst of images recording a single wave includes views of initial splash along with the rushing swirl that shot up the slot.  I just had to remember to lift my feet with each surge.  No single image recorded the full cascading event but a blend of three images was much truer to what was dramatically apparent to the eye.  I then added this surf blend to a background image which was captured to get the lighthouse in sharp focus.


Ok, while you are busy being appalled with all my trickery and before you say that I was not recording the actual experience, I would argue that the least accurate representation of crashing surf would be a single image freezing only a short segment of the event.  Whether or not you agree there is one more point me can all acknowledge.


Don't Get Washed Out to Sea


Having on a couple of occasions been nearly stranded on a rock as the tide came in, I feel qualified to make the point that it is important to check the tide tables and anticipate the surge. It is always safer to set up just AFTER high tide. Especially at higher Latitudes, the tidal rush can be surprisingly fast and "rogue" waves can occasionally strike without warning.    It is a reasonable precaution to allow a buffer between you and the water's edge.  Just remember that you may be able to swim but your precious camera gear cannot. 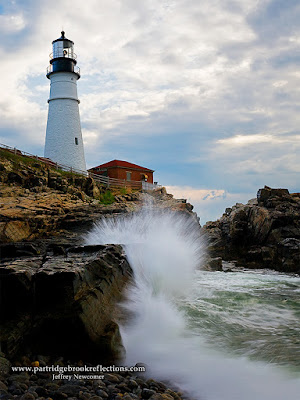 I hope that you will find better conditions on your next trip to the shore.  The best opportunities generally come at high tide after a big storm has kicked up massive breakers, but with a little planning you should be able to make the most out of whatever nature provides.  The waves are giving their all to the performance, the least you can do is work to bring it all home.