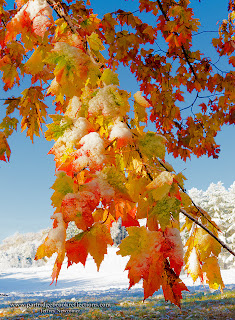 Yesterday we had our first snow of the season here in southwestern New Hampshire.  No matter the date, first snows always seem to be a surprise, but when "measurable precipitation" occurs in October it is not only surprising , but also a visual treat.  Typically our first coating occurs sometime after the leaves have fallen in November,  when we are all desperate to cover the drabness of "stick season" with a pristine frosting of white.  When winter storms strike early they can blast the remaining fall foliage from the trees, but given the right conditions, they  can also spread a beautiful white frosting on the colorful leaves.  The stark contrast between vibrant reds and golds and the clean white of freshly fallen snow is fantastic, but short lived. 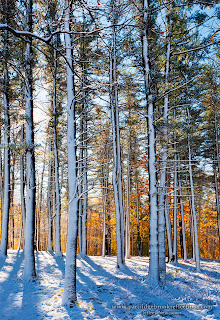 Friday morning offered such a special opportunity.  We live in the hills between Keene New Hampshire and Brattleboro Vermont and had just enough snow to coat the trees without totally obscuring the foliage.  I was excited to get out to shoot, but was frustratingly tied to home waiting for the furnace guy to show up for our pre-winter cleaning.  As it turned out I was able to get some of my best shots around the house.  When I was finally able to leave I was happy to find that the snow was sticking longer than usual. 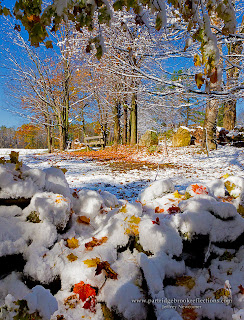 The time after a storm when the snow is still clinging to the trees is a winter "golden hour".  David Middleton, a great photographer and teacher from Vermont, calls these his "winter wonderland" shots.   It is the time when snow is the most magical, and it is often quite fleeting.  As the morning temperature raises above freezing it seems that the snow comes off the branches all at once with one disappointing plop, but yesterday things held together into the early afternoon. 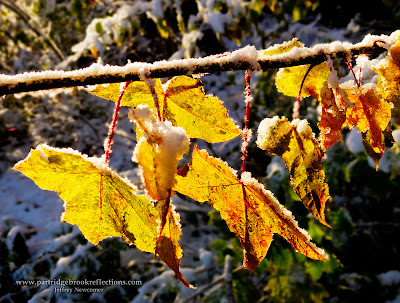 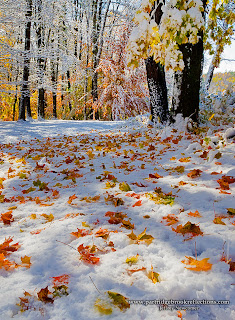 For much of today the "winter wonderland" was only a memory, actually a memory and about 200 images.  But this evening the snow has return with a vengeance.  By morning we may have over one foot.  I have to suspect that all this October winter must be in response to all the whining I have done about the terrible color this autumn.  Whatever the reason, in New England,  we all know that the only abnormal weather is normal weather and that's why it is such a great place for photography.
Now let's see if I can get this posted before the power goes out!
Posted by Jeff Newcomer at 9:06 PM